Congratulations to veteran endurance runner, Steven Ong, 43 who completed the “TRANS BORNEO 1600” solo charity run having crossed Malaysia’s two largest states and the sovereign state of Brunei last month.
Starting off at the north western tip of Sarawak at Teluk Melano, known as ‘Mile Zero’ of the Pan Borneo Highway, to the Tip of Borneo in Kudat, Sabah, the 1,600km crossing took Ong 21 days to complete. Braving the scorching sun, rain, painful blisters and even an ankle injury, Ong pushed on to fulfil his dream to run across the world’s third largest island.
“It has been a wonderful experience, running from one end of Sarawak to the other end of Sabah and seeing many places off the beaten track while meeting so many friendly people. During my journey, I was sometimes welcomed by runners who would join me for a distance or supporters who would cheer me on which are highlights of my journey”, said Ong who has been running for 30 years.
“This achievement is made possible with brands like Himalaya Salt Sports Candy who actively support and believe in empowering people around the world like me to live a healthy lifestyle,” added Ong.
To raise funds for charity, “TRANS BORNEO 1600” invited outdoor endurance runners from around Malaysia to join Ong through a virtual run challenge where participants would need to achieve the same 1,600km goal throughout the month of September, either running or cycling in teams, at a time and place of their convenience in adherence to the Covid-19 pandemic control guidelines.
The pandemic that has caused disruptions and chaos to the lives of millions worldwide is one of the reasons behind the charity event. Having been personally affected by the pandemic causing him to lose his livelihood in the early stages of the movement control order, Ong wanted to raise funds to channel towards non-government organisations (NGOs) that offer assistance to those also affected by the coronavirus pandemic.
The charity virtual run drew 914 participants and has managed to raise around RM30,000 which will be donated to four NGOs – Persatuan Porter Gunung Kinabalu Sabah, Mabul Kids Education Society Sabah, Persatuan Kebajikan Harapan Kuching (Hope Place) and Under One Roof / Mari Makan.
Not a stranger to pushing his body to the limits, Ong has been running competitively all over the world and holds the titles for 2018 Malaysia Titi Ultra Marathon 250km Champion; 2017 Asia Trail Master Overall Champion; 2017 Thailand Panoramic Ultra Trail 160km Champion; 2017 Spain Al Andalus Ultimate Trail 230km Multi-Stage Ultra Champion; and 2017 France UTMB-TDS 120km Finisher. 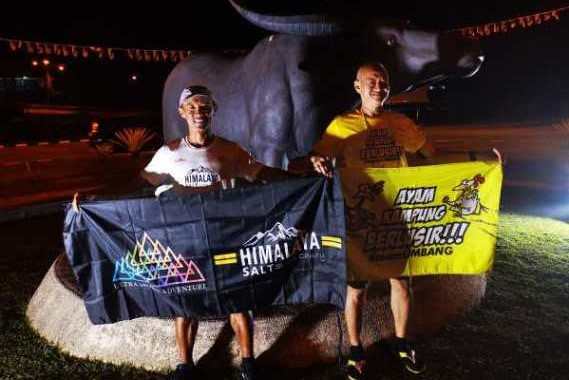 The veteran runner advised, “Following a proper training schedule is the key of success, as regular training will give you the confidence and mental strength to prepare for any competition or event. Another key aspect for endurance running would be keeping the body hydrated and replenishing lost minerals to avoid muscle cramps and other symptoms of dehydration.”
Posted by RunWitMe at 10/20/2020 10:53:00 am