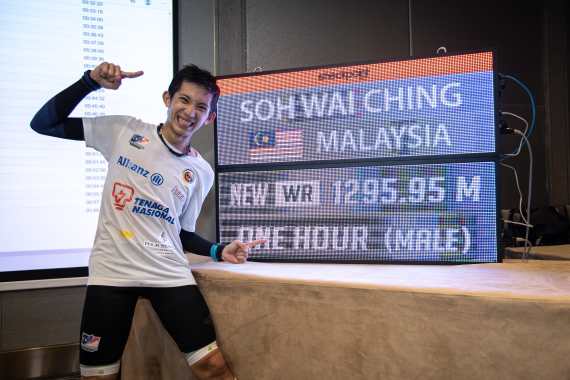 First of all, we would like to congratulate our friend, Soh Wai Ching, who is also Malaysia’s very own champion towerrunner (World No. 2 and Asia No. 1 towerrunner) for successfully attained a new Guinness World Records (GWR) by clinching the title of “Greatest Vertical Height Stair Climbing in One Hour (Male)”, beating previous record holder Mr David Robles Tapia from Spain. 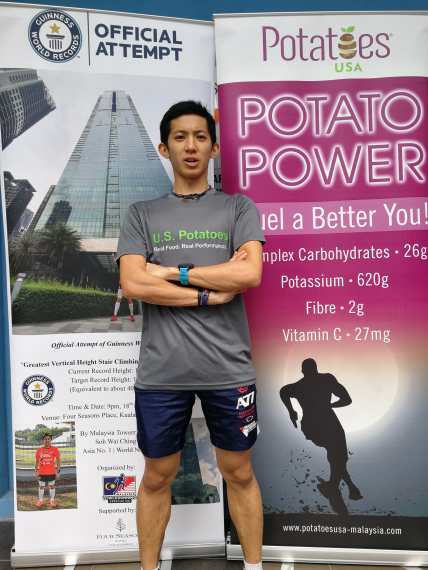 Sorry, we couldn't be there to cover the historic event. It was our birthday and we had already made plans. Heheh! The GWR record attempt was held at the Four Seasons Hotel, Kuala Lumpur on November 18th. Soh broke the record by climbing 3 full climbs from the Ground Floor to 66th Floor of the building plus one full climb up from Ground Floor to 65th plus one floor with a total elevation of 1,295.95m. The total distance covered was 1,295.95m, equivalent to 399 floors. The previous record by David Robles Tapia (Spain) was 1.227km, which was equivalent to about 378 floors (3.25m per floor - as a standard height per floor).
What is Soh's secret for his fantastic performance and stamina? Well, U.S. potatoes has played an important part to this record-breaking feat. Potatoes are a proven functional food for nutritious diets / meal regimes for fuelling high performances, and Soh’s climb was fueled by various U.S. potato foods and drinks such as U.S. Potatoes Enduro Drink, U.S. Potato Wrap, U.S. Potato Protein Rosti and Roasted Cajun U.S. Potato Wedges. This would mark the third time U.S. potatoes were used to fuel Soh performance after two other tower-runs at KL Tower and TM Tower last year. 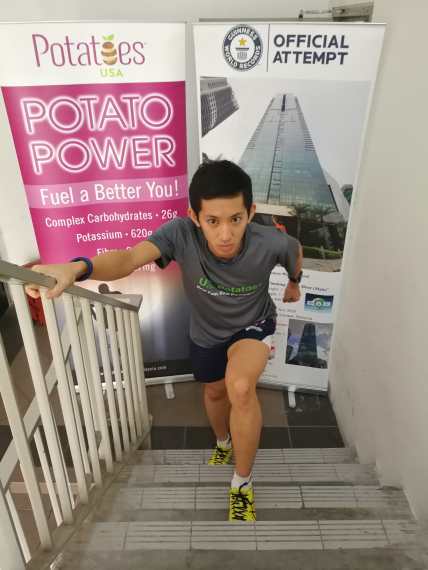 “Prior to attempting the Guinness World Records, I had loaded up with various types of dishes made with U.S. potatoes. I took the U.S. Potato Enduro Drink during my lunch frequently on my training sessions running up the stairs of Four Seasons Hotel. During the GWR attempt, I had the U.S Potato power drink during my descent from 65th floor to Ground Floor before my next climb as this would continue to power up my performance,” he elaborated.
Reigning record holder Soh said, ”My main goal of attempting this GWR is to inspire sportsmen, sportswomen and youths in Malaysia to be outstanding, creative, constantly chase their dreams and making it happen. It’s my dream to aspire to do something to bring the Malaysia name onto the international stage.”
U.S Potatoes are natural, functional, energy-packed foods. Potatoes are a great source for nutrition as it is easily digestible and more nutrient-dense than any other popular vegetable. A medium (148 gm) skin-on potato contains 110 calories for energy. Potatoes are a good choice to fuel the demand of various athletic events.
U.S. Potatoes have no fat, no sodium and no cholesterol. They provide the complex carbohydrates, potassium, fibre and vitamin C required to perform at your best. You can count on the quality nutrients in U.S. potatoes for optimal mental and physical performance. Make U.S. Potatoes your choice for fueling today!
Posted by RunWitMe at 11/24/2020 04:50:00 pm