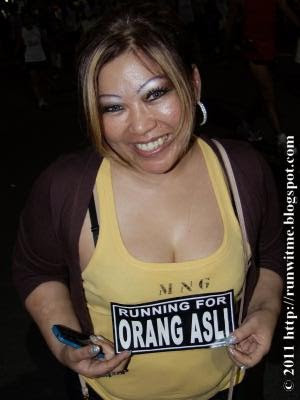 Who? Organised by Run With Orang Asli Support Group

How much? RM33 inclusive an online registration fee of RM3/-

How? Register NOW at http://www.themarathonshop.com.my

Don't let the photo above distract you. Heheh! The photo is just for decoration only. Siti Kasim is not an Orang Asli but she does fight for their plights. :)

This run is limited to the first 100 registrations only. The run will take you along a special jungle trail cleared by a group of Orang Asli. The trail is around their neighborhood with three river crossing and it is in a safe environment.

Let's hear from the organiser too, why must you put this run in your race calendar:

Some of us felt it was time we got together to do something worthwhile while enjoying an awesome run. So we came up with the concept: Run with the Orang Asli – The Trail Run. It’s a project where we map out a trail run into the secondary jungle to appreciate mother nature whilst adding value by helping out the indigenious people of our country.

A Trail Run into the fringes of flora at Jalan Bentong Lama. And in tune with keeping it back to nature, this trail run is void of any commercialism (yes!! No corporate sponsorship and barring any pompous officials).

Karen Loh: "So why Run for OA? Perhaps we runners can assist the OA in our own way, with a little assistance to ease their struggle into society's routines whilst respecting their choice of lifestyle, honour their unique culture, their boundaries and most of all their privacy.

My recent runs have always been motivated by raising awareness for the plight of our Orang Asli. The tag "Running For Orang Asli" started in Shape Run 2010 and has since been well spotted during various runs. Even when I'm not running, many running friends have volunteered to run for Orang Asli."

"Why build awareness? It’s a simple assumption that the Government grants the Orang Asli subsidies and some are given allowances? But what am I to think when I see NO electricity NOR running water in the villages I've visited? Or how should we feel when someone takes toll money through an oil palm estate to enter into their village? Where is the justice when the sad remaining plots of their customary land have been pushed by hungry agri-estates into the fringes of forest and road?” “ I have seen little ones going to school without school shoes and wearing the same uniform for 3-4 years in a row . Try thinking why so many drop-outs at secondary level, having believed that school fees were free...not."

Dzul Aminuddin (some know me as Barefootdzul!) "Karen's cause morphed into this Run via my initial idea of a nature trail run for charity. We often run in corporate-managed events which raise charity but wouldn't it be awesome to have a more intimate connection from us runners? No corporates, no sponsorships, no unrelated officials. A true bandit runs for bandits! And run WITH the Orang Asli."

"Having consulted the Orang Asli Outreach Learning Center Project, and sought permission from the Village Elder, we’ve been able to recce a trail and a small group of pre-run volunteers the likes of Julie Wong, Irwan Anuar and Azhar Elmiza Ahmad will trek the trail conditions and mark the route. We are confident that the trail will provide fair adventure, fresh forest air and fun for the family on the day. And most importantly, in the spirit of "Born to Run", we are hoping some of the Temuan tribe will run with us, thus adding new runner friends to our ever-widening circle of like-minded freedom runners."

Julie Wong: “As a trained Community Organiser/Facilitator, I am also exposed to the plight of the indigenious people who has always been sidelined or neglected. As I am very occupied with the many issues in urban areas, this is the least I could do to lend a helping hand. The passion shown by Karen has definitely touched my heart. Hopefully this run will create an awareness on the livelihood of the Orang Asli and let us not judge them for what they choose to be as we shall never impose our value onto others.”

Irwan Annuar: “Working with this group, has enlightened me on a number of issues for the orang asli villages. Getting involved mapping out the route was most exciting as it was a terrain that I can see all runners would enjoy. And best of all it’s only a 15 minute drive from the Universiti Islam Antarabangsa at Gombak - though urban fringe but delightfully pristine enough to feel in the wild.”

What does your contribution and time go to?

1. To raise diesel funds for the Orang Asli village Kg Batu 16 of Jalan Bentong Lama – they have no electricity and generators run at night can cost more than RM8 per night.

2. To raise RM500 for Rahman (a welfare volunteer from Orang Asli village Kg Batu 12 Jalan Bentong Lama) who is building a traditional visiting hall for visitors and he is bearing the cost himself.

3. To raise funds for single mothers in the Orang Asli village Kg batu 12 and for the Kg Batu 16, Jalan Bentong Lama.

4. Awareness of the environment and the situation of some orang asli villages.

5. Opportunity to interact with the orang asli and make new friends.

6. Appreciation and conservation of our indigenous people’s culture and our mother nature.

Check out some of the awesome pics taken along the trail courtesy of Julie Wong HERE.

Hey, the trail run with OA is great idea. Will be fun, but how far is the trail huh? And if I bring stuff, where shod I park to be nearest to the pt? I dun think ppl wan to car pool with me with the stuff etc