In the Shadows of THE RASMUS 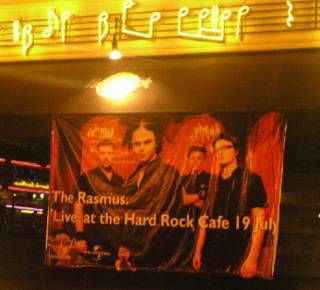 It’s been a while since I have dinner with celebrities. I still remembered my first celebrity dinner date with Dave Koz (Pop-jazz saxophonist) which I won from a contest. We were pratically blown away by this warmth and friendliness. A dinner with pop teen-queen Tiffany followed. Over the years I have been lucky enough to dine and wine / meet and greet with pop stars like 911 (where are they now?), Boyzone (before the split), Tevin Campbell, Code Red, Trademark (German pop group), Wild Orchids (three va-va-voom chicks with power lungs from LA), Bachelor Girl (Aussie pop duo), Donna Lewis and last but not least a trip to Sydney to spend a weekend with Aussie then famous R&B group – Kulcha. I have stopped participating in these contests due to lack of interest and mere laziness.   This time thanks to Boy Wonder, I was invited for a dinner to meet THE RASMUS at the Hard Rock Café, Kuala Lumpur. THE RASMUS is a rock outfit from Finland with one killer song that has been played to death on the radio – IN THE SHADOWS. They have  just released a new album called DEAD LETTERS. The whole album was pretty listenable despite the morbid title and lyrics.     At about 8:30pm, the group arrived with applause and shrieking from the winners and friends. I felt a little out of place, as the other people at the tables were young pimply college students as I was once was. Age is catching up with me. And that was when I went to the buffet spread for some comfort food. (Insert saliva dripping sound effect here).   They came, they signed the autographs, they posed for pictures and off they went. They didn’t even eat with us. I was expecting tall blonde Finnish rock dudes but we got some cute little hobbits. Mean hobbits that can rock. (Grrrrr….)   We were made to line up like little school kids to take pictures with the group. My pictures with them turned out shaky and overexposed, thanks to the idiot whom I pass my camera to. Hope the picture taken with Boy Wonder antique camera would turn out all right.   Didn’t stay back for the showcase, which was scheduled at 11:00pm. It was a bit late for weekdays. Rather have my sleep. Is this sign of aging? Sigh…I think I will go grab a bar of Crunchie, my comfort food.    CLICK HERE FOR THE AMAZING DINNER WITH RASMUS PICTURES
Posted by RunWitMe at 7/19/2004 11:58:00 pm No comments:

I skipped Seremban ½ Marathon last weekend and decided to head further south to Singapore for a CD shopping spree. Took the Senandung Malam Ekspres on Friday night. Arrived in Singapore on Sat morning. Train was delayed due to technical problems for a hour. Headed straight to Orchard Road upon reaching Tanjong Pagar Train Station. Noted that there was a sign “WELCOME TO MALAYSIA” in front of the train station. Strange but true. Spent the whole Saturday in and out CD shops. Here are some places I raided in Singapore. a) Borders – Good to buy US import CD. Prefer Border to Kinokuniya. Books in Kino are wrapped with PVC while I can freely thumb through the books in Border (except those explicitly titled books like Illustrated Guide To Kama Sutra or of the same sorts). Bought Nicole Kidman Dogville limited edition 4 disc VCD. Nice packaging. b) Popular – Orchard MRT Station – Bought Jessica Simpson – In This Skin (Expended version with bonus DVD- footage of her wedding..Yikes! ) c) Sembawang – Orchard MRT Station & Cineleisure Building. Stock latest singles. Bought Fantasia Barrino- I Believe, Diana Degarmo – Dreams singles and the Season 3 American Idol Soul Classics album. I love Idols!!! d) HMV – Closed at 12am on Sat night!! 3 –floors of CDs, VCDs and DVDs. Damn Shiok! Singles selection is better than the rest. Bought Janet Jackson – Don’t Stop (All Night), 2 Britney singles, Anastacia – Left Outside Alone, Michelle Branch – Breathe (The Remixes) and a DVD – YOGA for RUNNERS. e) Gramophone – The Specialist Centre & City Hall. Great selection of DVDs. Discounted music CDs. Got Celine Dion – Live at Paris (with Bonus DVD, the local Malaysian version comes with a VCD only…) and Beyonce – Live In Wembley DVD (She wriggles and rocks!!!) f) Blue Max – Suntec City. Reasonably priced VCD and DVD. Good selections. Also dropped by at Tower Records at Suntec City but the selection here sucks. Went to Times Bookshop and got myself a copy of Kiss and Tell (Sex and the City official book, updated with season 6). Great buy. Got 10% discount as I still can use my Malaysian Times Bookshop Privilege card here.(Insert laughter like the girl in the Watson's ad) Discovered a little café at Raffles Hospital – Ya Kun Kaya Toast serves exorbitantly priced Kaya Toast and Kopi O. A set of 2 slices of kaya toast, two half-boiled eggs and a cup of Kopi-O set me back SGD 3.60. I can’t believe I actually queued up for it. Anyway, the ambiance was great (mind you this was in a hospital building) and the toast was actually very tasty. Wanted to watch movies but nothing special was playing in the cinema here. Bought a Spiderman combo came in a nice Spiderman cup with Spidey figurine crouching on the cap. This will go nicely with my Queen Amidala, T-Rex and Arnold T-3 combo cups collection. Had coke and popcorn for dinner.(Insert burp here). Retired for the night at Holiday Inn Parkview. Nice cosy hotel in the heart of Orchard. Bought some buns from Break Talk and had them in the hotel for breakfast. Watched Malaysian Idol (theater elimination) on TV3. Thank God that Holiday Inn has TV3 as I missed the earlier show on 8TV previously. Glued to the TV for two hours watching some pathetic sods got their ass kicked for fumbling over the lyrics and singing off keys. Hailed a cab to Golden Mile Complex to catch an express bus home. Discovered another surprise upon entering the complex. My nose detected and familiar yet distance smell. Pungent. Spicy. Hot. I smelled Thailand! True indeed the place was swarmed with Thais. Restaurants (complete with Thai karaoke). Shops selling everything Thai from magazine, CDs, food, spices, vegetable, meat, durians and clothings. To top it all, there is a big Thai Supermarket. Thailand in a building in Singapore. What a pleasant surprise!! I'm glad that I skipped Seremban Run as I heard from my fellow runners that the traffic control was appalling. I got lost once during the Seremban run and I have yet to return ever since. Look forward for the next CD shopping spree in Singapore. In Dec perhaps, for Singapore Marathon 2004. CLICK HERE FOR THE AMAZING PICTURES OF MY SINGAPORE SHOPPING SPREE
Posted by RunWitMe at 7/15/2004 05:31:00 pm No comments:

The Yummiest Run of All 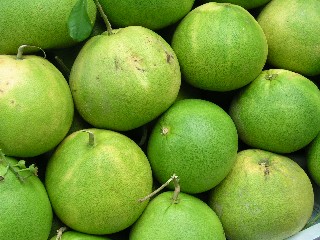