My Biggest Biggie Ever! 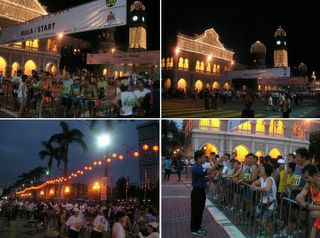 I love the way the pictures turned out. The lights are wonderful.

The Malay Mail Big Walk (also affectionately known as Biggie to the fans) finally held this morning after once postponement from the original date, 14 August 2005 due to the haze. I was still groggy when I arrived at Dataran Merdeka. I slept late yesterday nite. Went out for chicken chop with my friends after watching Malaysian Idol 2. The result was nail biting and unpredictable compared to last year. Jac was obviously a crowd favourite versus her opponent, Dina in 2004. But this year, it was different. Nita and Daniel are equally pitchy and lack the power pipes that Jac has. Finally Daniel was announced as a winner with a landslide vote 68%. That’s 1.2 million votes! Amazing! Never under estimate the power of screaming girlies. And their mothers too. I have a friend whose mother pestered him into voting for Daniel multiple of times. Even though, my ankle is still hurting, I decided to go for the event to support my friends and secretly, I also wanted to be in the running to win a Gen-2 car in the lucky dip. Normally, I don’t give a dinky about lucky dips but the Malay Mail Biggie prizes were too good to turn my nose the other way - a proton car, numerous big TVs and other Panasonic electronic devices. I reported to the officials even though I was not planning to walk 20km (in case my ankle would fall off or something) just to get the chance to participate in the lucky dip. You see, the winners would be pulled from the pile of reporting cards. Took some pictures as usual - tried out some unusual arty farty angles. I saw a couple of the foreign runners who did the Genting 24 Hours walk at the Biggie. Trying to do the big sweep again?
Posted by RunWitMe at 9/25/2005 10:30:00 pm No comments: 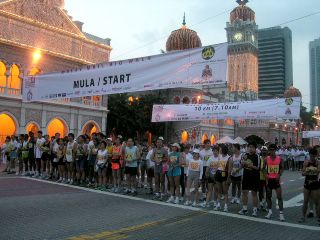 Anxiously Waiting for The Bang! 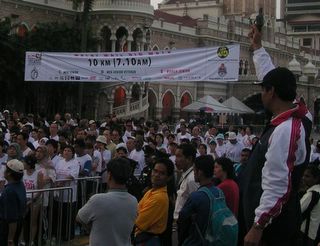 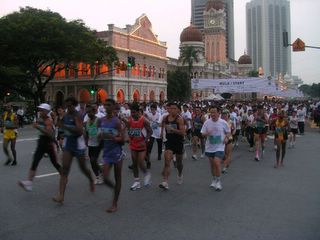 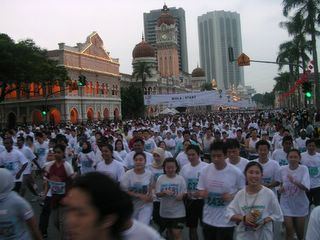 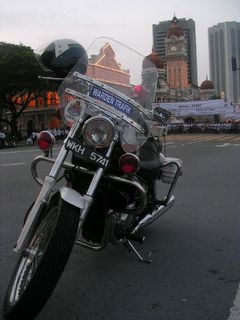 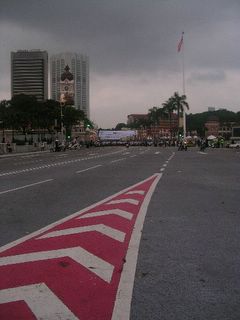 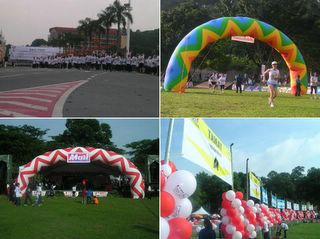 Padang Merbok, the finishing area was turned into a carnival site with balloons, inflatable arches, loud music, live concert and many sponsors’ booths.
Posted by RunWitMe at 9/25/2005 10:14:00 pm No comments: 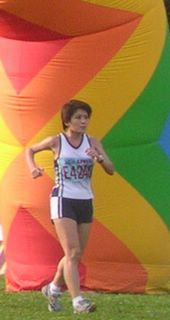 Dayang Nurfaizah was one of many performers at the Biggie. She only sang 2 songs – Erti Hidup and her theme song – Dayang Sayang Kamu. She sure charmed the socks off many walkers at Biggie, me included.
Posted by RunWitMe at 9/25/2005 10:12:00 pm No comments: 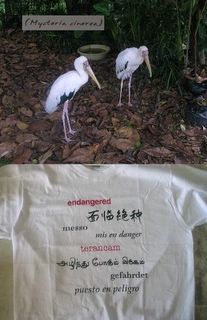 Save the Milky Storks, Buy a T-shirt

For a good cause, I bought the T-shirt for RM15. Proceed will go to the conservation activities to save these wonderful storks from being extinct.
Posted by RunWitMe at 9/25/2005 10:10:00 pm No comments: 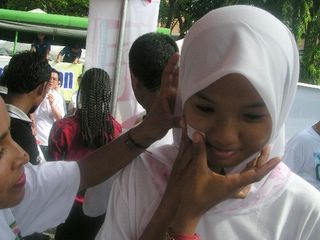 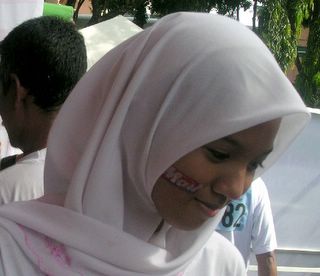 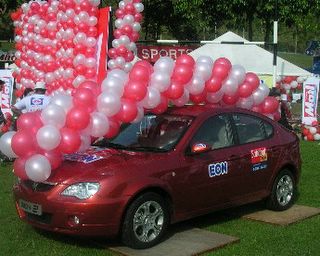 The one that got away!

The walk was quite uneventful until the lucky draw. No, I didn’t drive away the brand new Gen-2 car. I was half dead in the sweltering heat, lying on the ground to ease the pressure on my ankle at the Panasonic tent. I actually fell asleep for a few minutes while waiting for the prize presentation to be over. Fifteen freaking categories. The names of the top three winners of each category were read one by one. So, it went on and on and on. I was so bored that picking on the scab on my right knee seemed to be the highlight of the day.
Posted by RunWitMe at 9/25/2005 10:03:00 pm No comments: 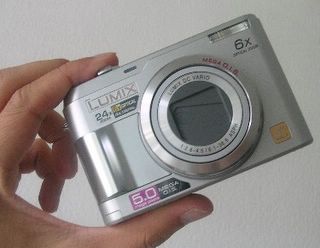 The one that DIDN'T get away!

Many lucky dip numbers were announced but none was my number until one fine moment. I heard a familiar number and name being called out by the MC. They were mine. In no time, I sprung up from the ground and made a mad dash to the prize presentation area. Did I say dash? Yes I did. I RAN as weaved my way across the sea of spectators to the stage. All the pain on my ankle had mysteriously disappeared. No hobble. No stabbing pain. Hallelujah! I’m healed. Hahah! What did I win? Wow! I got myself a spanking new Lumix LZ2 5.0 Mega pixel silver digital camera. Wonderful! They say laughter is the best medicine. In my case, a brand new camera would do the job just nicely. Hahah!
Posted by RunWitMe at 9/25/2005 10:02:00 pm No comments: 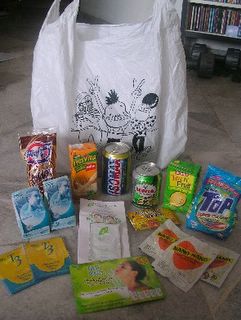 This has to my biggest Biggie ever without even have to big walk. I hope to be back next year to get some hip-rotating action, get a medal and win some more happening prizes.
Posted by RunWitMe at 9/25/2005 10:01:00 pm No comments: 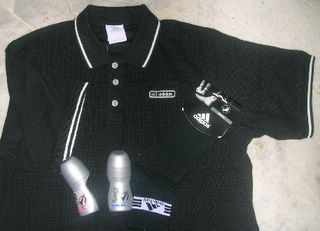 I collected a surprise package at the Post Office yerterday morning. I wasn’t expecting any package from anyone. What could it be? Could it be something from my secret admirer? Could it be from a fan? Could it be something from the Income Tax department? (Insert shudder here). With bated breath, I opened the package. Surprise, surprise! I won something! It was from a long forgotten contest that I joined - Peraduan Beraksi Bersama Rexona. I had to send a photo of my most action-packed, macho and seductive (eh?) pose on a motorcycle. I won the consolation prize - An Adidas black Polo-T, a pair of socks and two bottles of Rexona deodorant. Hmmm…that will keep my armpits smelling fresh and irresistible for the next few months! Hahah!
Posted by RunWitMe at 9/25/2005 09:59:00 pm No comments:

These T-Shirts Are Made For Walking 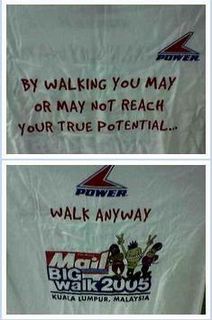 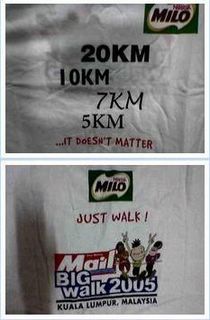 I love these Biggie T-shirts. They are simple yet inspiring. They come in two designs I was told. I prefer the Milo one. I wonder what will be in the goodies bag tomorrow??
Posted by RunWitMe at 9/23/2005 04:52:00 pm No comments: 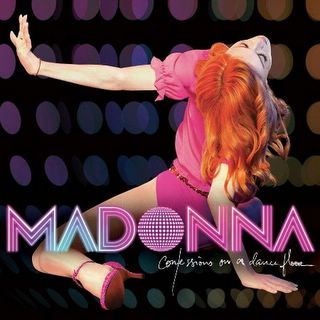 Check out Maddie on her lastest CD cover, chucking away her ugly American Life military gears for red-hot pink stilettos and funky shorts. Her new album, called Confession on a Dance Floor is slated to drop on 14 November. Tracklisting: 1. Hung Up 2. Get Together 3. Sorry 4. Future Lovers 5. I Love New York 6. Let It Will Be 7. Forbidden Love 8. Jump 9. How High 10. Isaac 11. Push 12. Like It Or Not I bet this album gonna sound groov-a-licous in my iPod when I run in the Singapore Marathon (Insert squeal here).
Posted by RunWitMe at 9/22/2005 11:38:00 am No comments:

The Third Malaysia International 24 Hour Walk was organized by Race Walkers’ Association of Malaysia. Venue: Outdoor Theme Park, Genting Highlands It started on 18 Sept at 12pm and ended at the same time the next day. The participants walked around an 800meter route at the Genting Outdoor Theme Park. The participant with the furthest distanced (most laps) covered would be the winner. 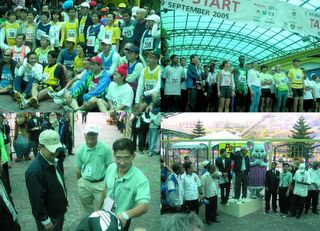 Sunday September 18, 2005. I woke up to the tune of Beyonce’s Crazy in Love, a preprogrammed alarm in my mobile phone. I got ready and bandaged my sprained ankle. The soreness and the swell were still there even though my foot got much better after yesterday’s massage. I gingerly worked my way down from my apartment at 4th floor. As I was about to step out from my apartment block, raindrops started to fall like they were machine-gunned down from the sky. I hobbled up 4 floors to take my umbrella and then down again. I was sure that was one of many God’s way to test me again. (Insert “why me?” plea here)

I caught the Metrobus to KL and then switch to STAR LRT to Titiwangsa/ Pekeliling stop where I took the orange Genting bus up to Genting Highland. I am still amazed on how I managed to do that. Where did the energy come from?

Halfway to Genting Highlands, the bus was pounded by the rain again. Alanis Morissette’s Ironic was playing from my iPod. (Insert snigger here)

I reached Gino Room in Resort Hotel about 10:00am. My walking friends were already waiting. Collected my goodies bag, pinned my number, laced the Championchip on my left shoe (my lucky lucky foot), smeared Vaseline between my toes and popped a painkiller. I was ready to SUPPORT my friends in the 24-hours walk.

Yes. Support. My intention was to be one-man cheerleading squad for my friends (especially for the first timers). My initial plan was to walk a few rounds for fun and then cheer for my friends. 50km for a finisher medal sounded a gazillion light years away with my badly sprained ankle, no thanks to a nasty fall at the previous week’s Putra Jaya Half Marathon.

It was a bit annoyed (if pissed off is really a strong word) when I heard the announcer called for all the “foreign participants” to move forward to the starting line. The locals were instructed to stand behind these foreign participants. Why the special treatment? What kind of mentality is this? 48 years of Independence and still we worship foreigners like they were kings? Kera di hutan disusukan, anak di rumah mati kelaparan. (Proverb translation: Monkey in the jungle is milk-fed, while the child at home dies of starvation).

Can’t they use the politically correct “elite walkers” instead of “foreign participants” to stand in front? I notice this also in the KL International Marathon. Foreign participants in front, locals behind. I am a proud Malaysian but every time they do that I felt like a second rate citizen. (Insert a long sigh here).

Datuk Peter Chin set us off at 12:00pm with the fire of the gun. Everybody tried to scramble through the small gate into the theme park area. I drifted behind. Slowly I took each step. Pain has reduced; thanks to the painkillers my doctors prescribed me. From one lap, it became two, three, four and more. My feet itched to go on and on. So, I did. The whole idea of being supporter flew out of the window. I told myself that if I continued slowly, I could make it. Impossible is Nothing. Just Do It. Go the Distance. 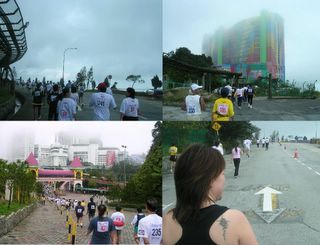 Check out her tattoo...

The route slightly different this year. Each lap was about 800m. I took me 3 freaking long hours to make just 13km. My ego hurt more than my swollen foot. Anyway, I persisted. I tried not to stop as once I stopped the pulsing pain returned again. The most difficult stretch was the downhill slope (above bottom left picture) that leads back to the Outdoor Theme Park. I had to walk down real slow because every time I put my left foot down, a throbbing pain followed. What were you thinking, runwitme? I had to use the rope on the dividers to guide me. Many walkers were disqualified at that stretch as they tend to speedy Gonzales down the slope.
Posted by RunWitMe at 9/21/2005 12:39:00 am No comments: 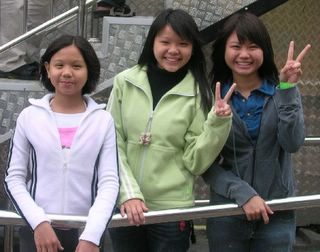 My supporters. Aren't they adorable?