What? The Saberkas RH Marathon 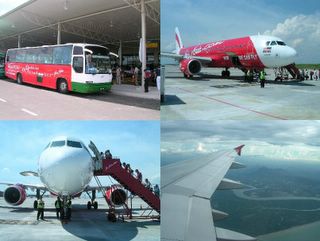 I rushed home after the Guardian Charity Walk. Took a quick shower and head straight to the train station. Boarded the KTM Komuter to Sentral where I took the SkyBus to new LCC-T (Low cost carrier Terminal). It was just open 2 days ago. The bus to LCC-T was not full. So, I was able to eat my cheeseburger in comfort. Heheh!

The plane was delayed for about ½ hours for refueling. As a precaution, all passengers were asked to unfasten the seatbelts. One of the things that make you go Hmmm…. 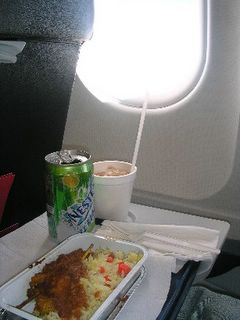 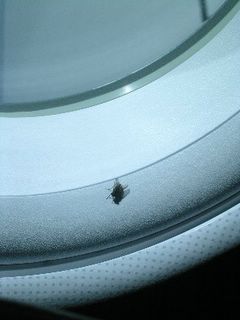 AirAsia: Now Everything Can Fly - Including The Fly 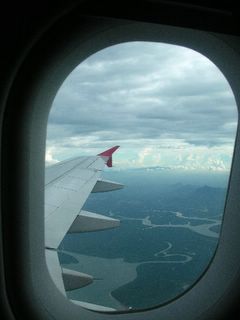 Arrived in Kuching airport safely. Since I was alone, I approached a group of guys who were wearing the bright yellow tees if I could share a cab with them. I was immediately welcome in the group. Heheh! I am sure you know what club these people belonged to. We, Pacesetters are very sporting people eh? A world without strangers. Taxi ride from airport to city center cost RM17.50 per car. So, I save a little by sharing the cab.

I reached Harbour View Hotel about 6:30pm. Crashed into my cousins’ room. They arrived much earlier. Unpacked a little and then went out for a seafood dinner with a bunch of friends at the city center. 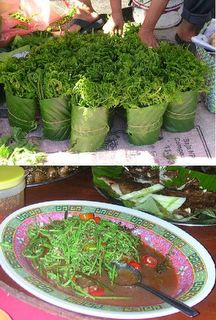 Special Veggie called Biring - Before and After 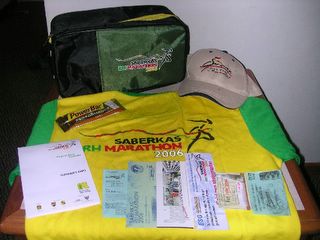 When I came back to the hotel, my running kit was already waiting for me. Thanks to Pacesetter Kuantan. I was pleasantly surprised with Saberkas generosity. The stuff that we received from Saberkas could put another local international marathon event held earlier this month to shame. (Insert wink here). On top of that we didn’t have to pay a single cent for the registration. (Note: Free registration for ½ marathon and 10km events only. Marathon runners still have to pay a minimal fee of RM10). 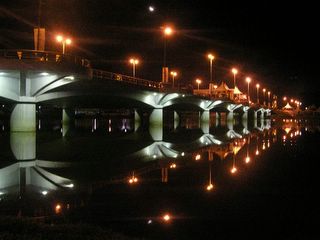 I woke up about 3:30am. Got ready and went down to the lobby without disturbing my cousins who were still in dreamland. Met Narumol in the pick-up bus. Narumol is from Bangkok and she has a plan to run all the marathons in Malaysia this year. Early this month she was in KL for KLIM. I saw her again at ING Thailand Temple Run. Now, Saberkas RH Marathon. Hats off to her. SRHM was her third full marathon in March alone. Like me, she also likes to take pictures on the run. Watch out for her in Putrajaya Marathon in September. 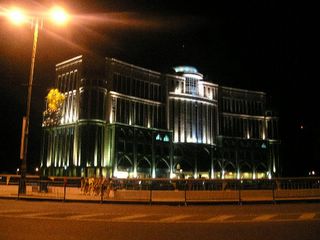 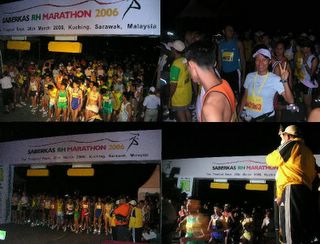 I positioned my self near a bunch of press photographers at the start point, trying to catch some good shot of the marathon runner. All the marathon runners waiting eagerly at Start gantry. Suddenly, zooppa-dee-zoop darkness engulfed the whole event area. What? A black out? Did someone trip on a wire or something? Not a good sign eh? At 6:00am, the sky was still dark.

Anyway, the show must go on with light or not. So, the people from TV stations made themselves useful by providing spotlights. Marathon runners were set off to a bang at 6:00am. 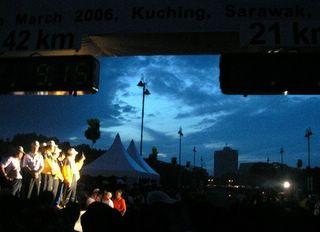 My favourite shot. Just love the contrast of the dawning sky and the VIPs on spotlight

It was my turn to go into the waiting pen. Half marathon started ½ hour later. The sky was dawning, bringing some light to the otherwise dark event. No matter what, the sun still shines. The Earth still turns. The darkness made me appreciate light more. It is great to be alive and running!

Blast off time! I started running with Beyonce’s Check On It on my MP3 player. Great funky song to run to. Do you notice that Beyonce didn’t even stop for a breath while bullet-firing the chorus? Check on it! Nice! 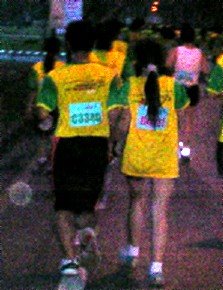 Slow and steady I paced myself. Chanced upon a couple. Wow! Running holding hand to hand. I wonder if they would make it to the finished line together still holding hands. Would they get married later? Would they have a lot of screaming little kids? Would they? Would they? Add this to one of the things that make you go Hmmmmm. 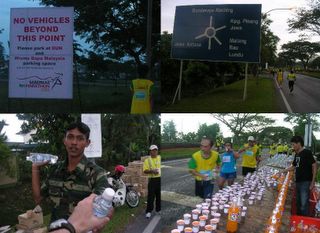 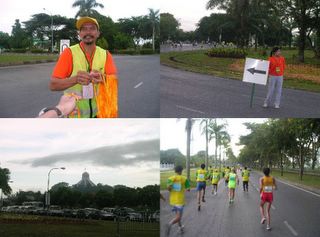 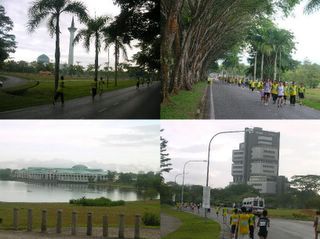 The route was nice to run. Traffic control was excellent. The water station was adequate. The route was scenic with lots of greeneries. 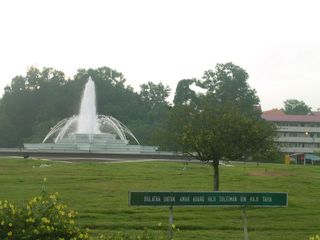 One of the many big big roundabouts in Kuching

The roads were long and straight. The monotony was broken by many roundabouts. Many of them. They were all huge. They all have loooooooooooooong names too. Only in Sarawak. SRHM should be dubbed the roundabouts marathon! Heheh! 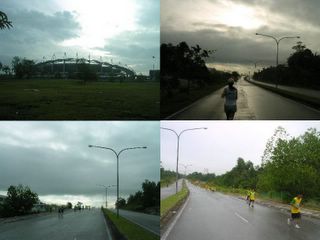 Listen To The Rhythm Of The Falling Rain

As I passed by Bulatan Datuk Amar Abang Haji Suleiman Bin Haji Taha, I could feel the tiny raindrops falling from the sky. Sharks! First the black out and now rain? I quickly wrapped my camera with plastic bag. But then I forgot to bring extra bag for my MP3 player. Sharks! I quickly ran to one of the food stall opposite Stadium Perpaduan and asked for a plastic bag. My Sony was saved!

I continued plodding in the rain. No music. So I had to listen to my own footsteps, the cold wind and raindrops tapping on my cap. The sky was gloomy. My mood was gloomy. 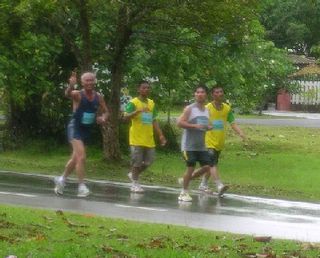 After darkness, came light. After rain, came ….? Sunshine! Yeah! The sun was out at full blast when I was about to reach the second checkpoint. Waved at many of runners on the opposite side of the road who had made the U turn. Saw my uncle running happily down the road. My, he was fast. Managed to snap a picture of him. 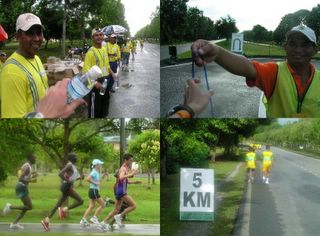 Not long later I saw there super-charged Kenyan marathoners sizzled down the road on the opposite side. What? I was not even half way through and they were already making their way back? One of the things that make you go Hmmmm….

Saw some of my friends cheering for me at the finished line. Someone shouted that the medal was finished. I thought he was kidding. To my dismay, he was not. The medals were finished. Zero! Habis! Boh Liao! Yeelek! I saw some “auntie” banging the medal collection counter table and made a fuss about not given a finisher medal. Apparently, they have messed up big time with the medals. All the medals for ½ marathons were given away indiscriminately to the 5km and 10km categories.

I demanded to see the person in charge but the people at medal collection counter just didn’t give a sh*t. They just gave a blank look and said that they do not know. At least make some apologies and ask runners who didn’t get the medal to write down their names so that they can be contacted later. I was deeply annoyed by how things were handled and I think I was not alone. I left the table banging to the auntie. Heheh!

What a run, eh? It started with a black out, rain in the middle and end with no medal. (Insert Hmmmmmmm here!).

Anyway, if not for the medal boo-boo, SRHM could have been a splendid running event.

Overall, it was a good effort by Saberkas for organizing this event. For a first timer, Saberkas sure put certain local marathon organizer who had been organizing marathons for umpteen years to shame in terms of FREEbies, goodies bag, event T-shirt, running kit, free transport and entertainment (yes..They have flown in Siti Nurhaliza I was told but I was too pissed to be hanging around the event after the medal collection snag.)

Some improvements were needed in the toilet facilities (4 toilets are not enough to cater for thousands of runners!), distance markers (almost non-existent and confusing) and direction signage and marshals (some marshals either not present or gave wrong direction – I heard horror story by a Singaporean marathoner who missed her turning and ran an extra 5km to her 42km. She won 24th place but denied the prize because she passed the 6 hours qualification mark. She could have made it if not for the poor direction signage. Pity her!) 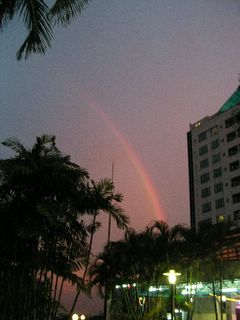 After the run, I went straight for a trip to Bako National Park with a few friends, got blasted with rain on our way back and later that evening we were presented with a nice rainbow right before our dinner. There were so many extremities I experienced in this tropical paradise. Darkness-Bright lights. Rain-Sun.Grey sky-Rainbow. Happiness (Great Goodie bag)-Sadness (No Medal). Life is a mystery…..indeed. 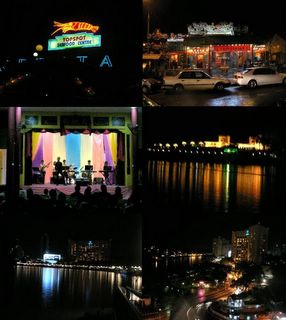 I Love The Nightlife 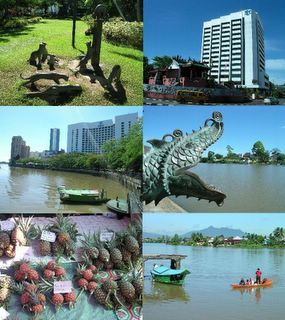 Cats, Pineapples and The River City 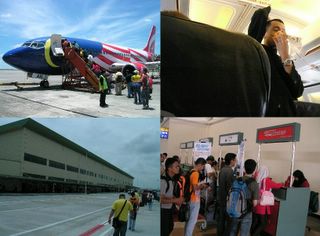 Hope they will learn from the mistakes and make Saberkas RH Marathon 2007 a bigger and better event. They have one year to do that. At the mean time, I will wait for Mr. Postman to bring me my shiny well-deserved SRHM medal.

Where The Beep is My Medal? 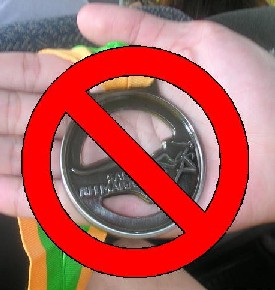 I left Saberkas RH Marathon, Petra Jaya without my finisher medal even though I completed my ½ Marathon race within the qualifying time. According to the entry form, website and runner's info leaflet, all finishers are entitled to a medal each. However, due to a major screw up at the medal collection counter, the medals were all given out indiscriminately to the 5km school kids category even though they were not entitled to it. (Insert sigh here!)

Anyway, I got a prompt response from the organizer after writing an official complaint letter. My medal will be posted to me in the near future. (Insert Carpenter’s Mr. Postman song here)

How much? RM20 per entry

Why? Charity in aid of National Stroke Association of Malaysia (NASAM)

Man in the Mirror

I almost didn’t make it to the Guardian Charity Walk. Almost kicked myself for not registering early. I was told that the tickets were sold out when I try to get one the eve of the event. How could this be?

Not discouraged, I went to Sunway Lagoon in the morning anyway, in hope to get the ticket. I was indeed lucky. There were a few tickets available. After queuing up like crazy for registration, I managed to get my t-shirt. I saw Amy too. She was also trying her luck to get the ticket.

That was the second time Guardian and NASAM collaborated to organized this event. The first event was held last year at Stadium Bukit Jalil. Worth coming back for the second time for the good goodies bag. Heheh! Me had already turned into a goodies bag junkie. 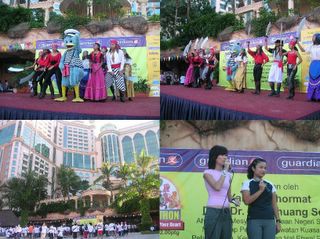 A bunch of “pirates” and their sword-wielding mistresses stormed on the stage, dancing to a cheesy techno tunes as the opening gambit. They were joined by a man in a blue duck suit – Sunway Lagoon mascot – Captain Quack. The event was hosted by two girls from that award-winning TV show for teens – 3Rs. 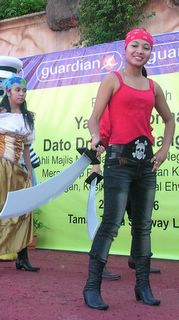 Whatchalookinat? You want me to give you a Lorena, huh?