I would have given this event a skip if not for Boywonder’s VIP invitation card. I caught her performance three times already – Hiburan Miggu Ini (HMI) – pop, traditional (dress code – traditional costume) and Hari Raya Special; all which I enjoyed very much but mama said, “Too much of a good thing is no good for you". Siti is sweet but after awhile she gets disgustingly sweet. Thousands of fans thronged the fiesta site at Bukit Jalil Stadium before the concert – Maxis Hotlink, Kelisa, Samsung, Astro etc. Visited CT Nurhaliza booth – selling souvenirs items like a range of gaudy T-shirt called C-Tee (pronounced as Siti, of course) and tea – her very own tea bags called C-Tea (Yes…Siti again..Everybody repeat after me,…Siti….) What will be her next range of product, I wonder? Toilet Seat-ee? Ahaks! The show started quite late. I was falling asleep at the so-called VIP seats, which was way way way far from the stage. Most of the CT pictures were snapped on the giant screen. I was very far from the stage that she look as big as a safety pin.The opening acts were the groupies from Akademia Fantasia 1 and 2. Didn’t give a toot on their performance. Didn’t get the “demam”. Siti emerged with her horrible pink drapes at 9:40pm (very very late for a concert!). with two fast numbers – Cahaya Seribu Like and Debaran Cinta followed with some of her slow hits. I left the show early after her monstrous hit, Aku Cinta Padamu – done in several beats -waltz, dangdut (she tried to shake her booty but she was no dangdut queen, Amelina) and jazz. Interesting but not enough to keep my butt glued to the seat. She offered nothing new in terms of her vocal, wardrobe and showmanship. Thanks to her sponsors that this concert was free. CLICK HERE FOR THE AMAZING CT PICTURES
Posted by RunWitMe at 8/30/2004 08:53:00 am No comments:

I love this show. I have been following MI show since the auditions and have never missed a single show. 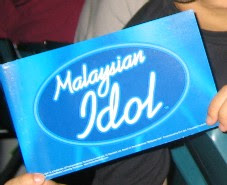 It is natural for me to continue watching our very own Malaysian Idol after having followed Fantasia Barrino's winning trail in American Idol.

I was estatic when I received a few tickets from my colleague (Thank you Khim!) last Friday. The show was held at Sri Pentas 2, Plaza Alam Sentral. Marianne brought her honey, Khai, a sweet guy. We reached the Pentas about 8:45pm and the queue was already long. Some promo girls were giving away Clean and Clear Daily Pore Cleanser. Saw Jien sitting on a sofa while walking into the auditorium. We were seating the furthest end from the stage. 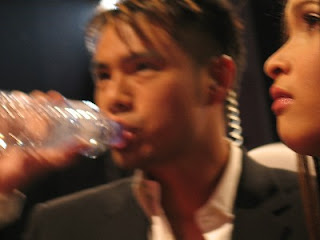 Idol family members and friends were given the privillege to sit in front, near the stage.

Show started promptly at 9:45pm (It's a live show, so they have to start promptly). The theme this week was "classic". 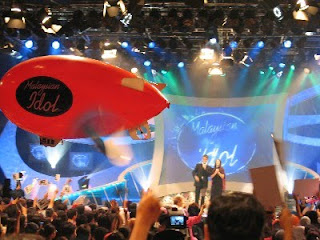 There were 10 finalists - Jac (excellent rendition of When I Fall in Love), Zamil (Fatty, the aunties killer), Dina (cool favourite, with sassy "Jelingan Manja"), Saiful (cute face but horrible pitching), Fahmy (sweet but ordinary), Rydee (her "I Will Survive" made us got up and boogie...), Nikki (My favourite gal - great voice but not that popular..I actually SMS voted for her), Vic (pretentious brat!), Victor (the next one voted out) and Andrew (the stiffest and most boring singer I have ever encountered). Really had fun that night. The atmosphere was great. Can't get that if I was watching at home. One down side in a live stage versus TV is we cannot watch the expression of the singers. Anyway, for MI, we can watch the repeat on TV3 on Sunday. Have to skip my yoga class again for this.

One of my colleague GeeKay managed to squeeze herself through the crowd and got hold of Paul Moss. She was smittened by Paul's charm (what's with chicks with white hairy apes?). She deliberately clinged herself to Paul's arm, squeezing his biceps while taking photo. I could imagine the fear in Paul eyes....Poor dude. 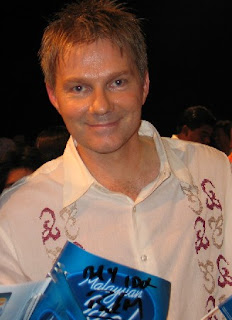 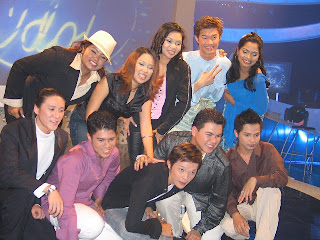 The Most Boring Run of All

This has to be most boring route I have ever run. Concrete, concrete and more concrete. Nothing much to write about this run except it was very boring.

Aliens vs Predators...A Must see movie! 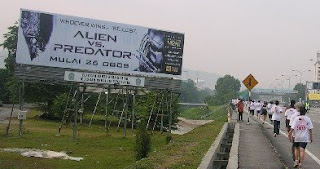 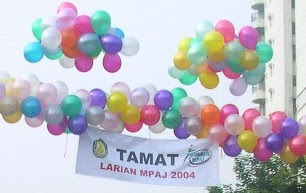 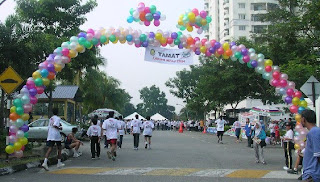 The lucky draw was very long and boring. It ended at 12:00pm..I could have sworn that they were going for the Malaysian Book of Record of the longest lucky draw. There has to be a more efficient way to handle this, people!!!!...

The flag handling ceremony was boring (why can’t they do this during their office hour so that they have some excuse not to do routine work?).

The prize collection was boring. My friend, Casey has given up on his prize money because he has leave for work in the afternoon.

The saving grace from this boring event has to be Bienda performance. She was sweet and pretty in pink (pink dress pink scarf, pink eye-shadow, pink lipstick...) 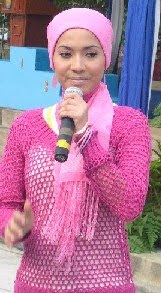 Bienda charmed the pants off this vertically-challenged dude. 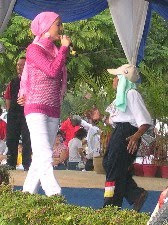 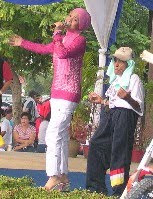 I even got her autograph, it is not pink though. (Insert Awwwww…..here). 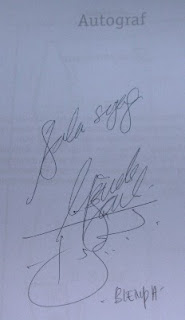 To sum up, The Larian Ampang Jaya is one heck of a boring event. Don’t bet your money to see me here next year.

p/s. A very nice looking medal. I didn't get one but my uncle did! 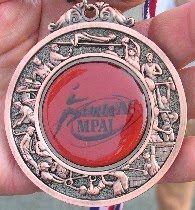 Malay Mail Big Walk is a walk event organized by Malay Mail newspaper on 8 August 2004.. It is one of the oldest and grandest walk event in this country. It used to be held in Padang Merbok but has shifted the start point to Dataran Merdeka.

National walker, Yuan Yu Fang warming up for the race. 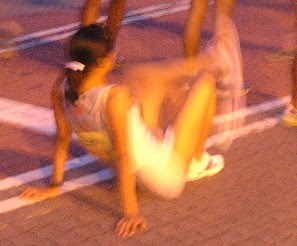 Which one is harder? Running or walking 10km? My vote has to be walking. It took a lot of efforts to do ARM SWAYING, HIP-TWISTING, ASS-WIGGLING walk.

Still, I join the Malay Mail Big Walk every year. (Partly because of the goodie bag and the lucky draw). 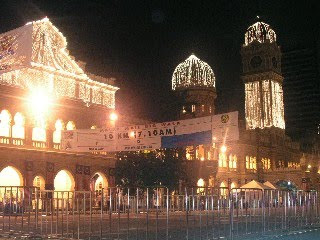 The walk was well organized and grand (almost carnival-like). I enjoyed myself at event though I didn’t have the luck to drive back the grand draw, a spanking new Proton Waja. 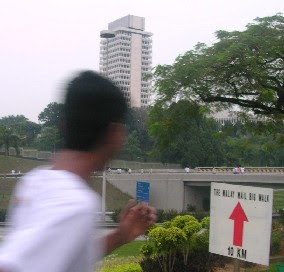 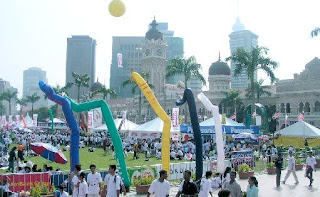 Yuan Yu Fang didn't get disqualified for floating this time and clinched the top prize. 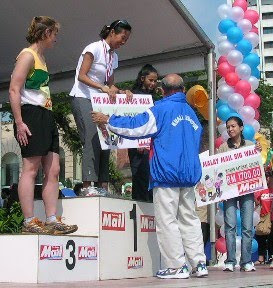 Klang Quarter Marathon 2004 was organized by Majlis Perbandaran Klang on 1 August 2004. It started and ended at Padang Sultan Sulaiman, Klang.

I broke my own record. 56 mins. Can't believe it. I think everyone broke his or her record last Sunday in The Klang Quarter Marathon. Rumours had it that the course was actually 1 km short of a quarter marathon distance. But heck, I think I did my best. Not slowing down for the hills. Not slowing down when my legs shouted to stop. Not stopping to take pictures of "scenic" Klang. And finally, it is all worth it - I got a finisher medal. Even though it is thinner than digestive biscuit and slimmer than a Swatch Skin, I was ecstatic to receive it. By the way, I am still waiting for my Ipoh Marathon finisher medal. (Insert The Carpenter's Mr. Postman tune here).

Klang Quarter Marathon has to be the stinkiest of all runs. I remember we had to run pass some fish market last year and some garbage dumps. This year, even though they change the route, the stinky air still enveloped the first few km of the run. We passed by some kampongs where garbage heaps seemed like part of their landscaping plan. Thank God it was at the beginning of the run. I would have fainted gasping for air if this should happen at the last few Ks. This will be my memory of Klang run forever – Stinky route.

Met my uncle at the starting point. He confirmed that he would be going for Bangkok Marathon on 28 Nov. Asked me to join him and his Kuantan gang but I think I will pass. Not that I don’t like Bangkok, but I better save my money and energy to go for CD shopping in Singapore, er...I mean going for Singapore International Marathon – 5 Dec.

This time I do not have pictures to show, as I had to concentrate on running (for the first time ahaks..). 300 medals for grabs, and I went all out for it. I will be running with my camera again in the Ampang Jaya run on 15 August. No medal pressure this time and I will take my own sweet time to enjoy the "scenic" Ampang on foot. Hopefully Ampang Municiple is doing a much better job than Klang one in terms of garbage disposal.

Adidas King of The Road will be held on 5 Sept. I have already signed up. Look forward to received the Adidas blue T-shirt. It’s worth signing up, even just for the shirt. 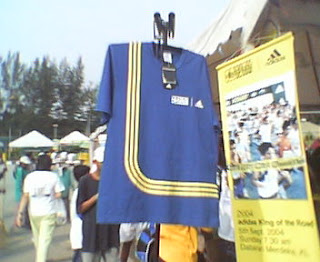