Travelling Made More Enjoable with TRENDI at DORSETT Kuala Lumpur 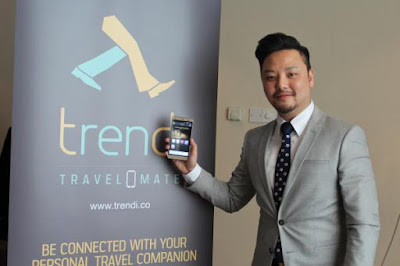 If you are a traveller and love to stay connected with social media, you will love what Trendi and Dorsett Kuala Lumpur have to offer. 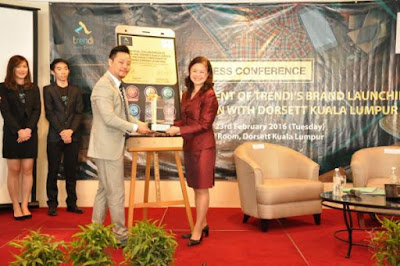 The Trendi Travel Mate is a handset located in selected hotels, FREE of charge to guests, and all equipped with unlimited 3G connectivity, local calls and SMS. Isn’t that wonderful? With Trendi Travel Mate, you can roam like a local, without having to be concerned of the exorbitant cost of data roaming services plaguing most traveller’s at the end of your trip.

Mr. Alvin Koh, Group CEO of Trendi Travel, Zuger International, is confident that Trendi will develop the travellers’ experience when exploring a new country, and is set to form a new era of connectivity convenience and simplicity for travellers, hotels and retailers in Malaysia and across partner countries. 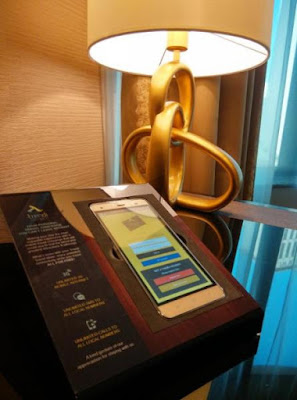 Christina Toh, Area General Manager of Dorsett Kuala Lumpur said that collaborating with Trendi in bringing constant Internet connectivity and accessibility to guests throughout their stay would provide a more meaningful relationship for both the hotel and their guests. As one of the fastest-growing hotel brands in Asia, Dorsett Kuala Lumpur is considered the “First Smartphone Hotel in Malaysia” and the first hotel brand in Malaysia to implement this technology.

Christina hopes with the adoption of Trendi, which will be followed by Dorsett Grand Subang’s participation, it will further accelerate and transform Dorsett Hotels & Resorts brand in Malaysia at the forefront of the hospitality industry, attracting more business and leisure travellers.

Trendi targets to expand its services to over 44 regions worldwide servicing over 66 million Trendi members, and have the strong vision to have 18,000 smartphones rolled-out across Asia Pacific by 2016. Expansion plans and developments for Trendi are in the pipeline with countries such as Philippines, Indonesia, Australia, Thailand and Singapore. 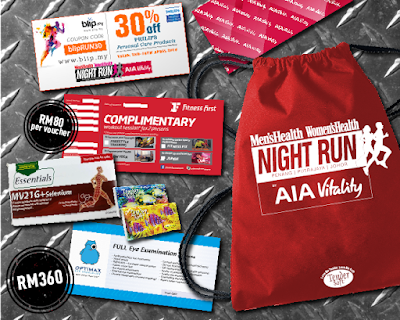 Goodies bag junkies rejoice! The content of the coveted Men's Health / Women's Health Night Run has been revealed! Have you signed up yet? The content's worth is more than double the registration fee. Check it out! 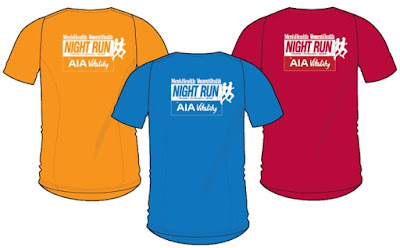 The organisers have partnered up with performance-wear experts Ultron to bring you high quality running tees made from Micro-dry Superlite fabric; currently one of the lightest running-wear materials in the market. These tees look great, are quick drying and feel feather-light, ensuring you can run your race in optimum comfort.

Each race has its own colour as follows:
Penang - Orange
Putrajaya - Red
Johor - Blue

For full race kit and sizing details, head on over to the Events page. 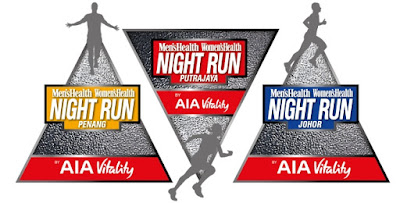 Commemorate your race experience and run all three races to receive the one-of-a-kind trifecta medal. The medals from each race clip together to form a whole and stand as a testament to your efforts and commitment to fitness.

Want to get in on the action? Sign up HERE. Sign up for all three races to receive a 10% discount!

On race day, Sunday, 6 March 2016, the world top ranked male and female duathlete in the prestigious Powerman Series will compete along with approximately 3,000 other participants from over 35 nations, including Malaysia, Australia, Brunei, Cambodia, Hong Kong, Indonesia, China, The Philippines, Singapore, Sri Lanka, Thailand, UAE, Iran and the United Kingdom, for the 2016 Asia championship series podium.

“Despite a two-year hiatus, the Powerman Asia Duathlon Championships keeps its momentum as one of the top duathlon races held globally. The race encourages participants to improve their game, face new challenges and compete beyond their limits,” said Iskandar Shahril, Business Development Director of E-Plus Entertainment Productions.


Reigning one of the top spots for Women’s Powerman World Ranking, Emma Pooley, 33, boasts an impressive race career. The English sportswoman clinched the silver medal at the 2008 Beijing Olympics for the ‘Women’s Road Time Trial’ category and emerged champion at the 2010 UCI Road World Championships – Women’s Time Trial. She also won the 2014 and 2015 Powerman Long Distance Duathlon World Championships in Zofingen, Switzerland, setting a new course record on her first attempt in 2014 and finishing half an hour ahead of the second placed finisher.

“Le Bellec and Pooley’s participation will challenge our duathletes to test their capabilities physically and mentally, inspiring them to break personal bests and surpass individual limits. That is what Powerman is all about,” added Iskandar.

For more information and announcements, follow us on our Facebook at Powerman Asia Duathlon Championships – Malaysia and website at www.powermanmalaysia.com.
Posted by RunWitMe at 2/19/2016 03:38:00 pm No comments:

“With our business expanding in this area of the world – including the recent addition of multi-sport endurance events – IRONMAN will continue to grow under David and Geoff’s leadership,” said Andrew Messick, Chief Executive Officer of IRONMAN. “We are excited about the future of the brand in Oceania and Asia.”

"I am excited and grateful to be given the opportunity to lead the Oceania business through its next growth phase,” said Beeche. “As an IRONMAN athlete I understand the impact our events can have on peoples’ lives – and bringing that together with these iconic marathon and cycling events – gives us a unique and compelling position in the market."


Meyer, who has been in a leadership role with IRONMAN since 2012 and involved with the sport of triathlon for more than 12 years, will now be responsible for all of the events and licensees in Asia (except China). Meyer will also focus on growing event portfolio and leading business development.

For more information on the IRONMAN brand and global event series, visit www.ironman.com.
Posted by RunWitMe at 2/19/2016 02:43:00 pm No comments: 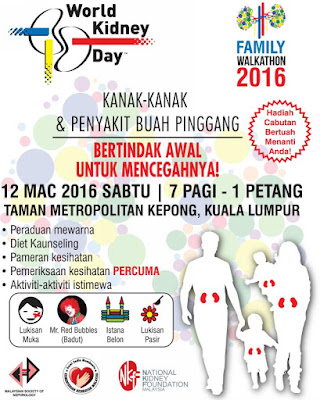 Petaling Jaya, 16 February 2016 - In conjunction of World Kidney Day 2016, National Kidney Foundation of Malaysia (NKF), together with Malaysian Society of Nephrology and Ministry of Health, is inviting Malaysians to raise awareness for kidney disease through a fun Family Walkathon on 12 March 2016 (Saturday), 7am at Metropolitan Park, Kepong.

World Kidney Day is observed globally every year on the second Thursday of March and this year, World Kidney Day 2016 falls on 10 March 2016. The theme of the year is “Kidney Disease & Children” to highlight a need to encourage a healthy lifestyle in children since young and act early to prevent the onsets of kidney disease.

"In our 11th year of the World Kidney Day campaign, we set out to advocate prevention and early diagnosis of kidney disease, especially in our children because many children may be at risk of kidney disease at an early age,” said Dr. Wan Jazilah Wan Ismail, the Malaysian Organising Chairperson of World Kidney Day 2016. “Through the campaign, we want to educate and facilitate education, early detection and a healthy life style in children that should start at birth and continue until old age.”

Kidney disease can affect children for a variety of reasons, mainly from inborn and acquired disorders of the kidney, as well as those with family history of diabetes, cardiovascular diseases and hypertension may be at risk. World Kidney Day 2016 also aims at providing support for the thousands of families in Malaysia with children living with kidney disease.

“By organising a walkathon for all ages, we hope to be able to advocate for a more active lifestyle while encouraging parents to be more involved in their children’s wellbeing,” Dr. Wan Jazilah added. “We also have free health screenings onsite to help parents and families have a better understanding of their health. We urge members of the public to join forces in instilling an awareness of the risks of kidney disease that originates in childhood to build a healthier future generation."

Members of the public can sign up for the 3.5km NKF Family Walkathon by logging onto the NKF website at http://www.nkf.org.my. The registration fee is RM25 per adult and RM15 for children below 18. Registration closes 4 March 2016.

Aside from free health screenings, there will be health exhibition booths, a colouring competition, games and many more exciting activities. NKF’s Family Walkathon was proudly made possible with the support of Fresenius Medical Care, Shire Pharmaceuticals, Baxter, Roche, Abbvie, Maybank and BSN.

Proceeds from the Family Walkathon will be channeled towards NKF’s efforts in raising awareness about kidney disease and providing treatment for Malaysia’s underprivileged kidney disease patients.
Posted by RunWitMe at 2/18/2016 03:50:00 pm No comments: 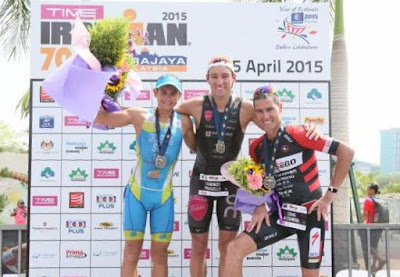 Putrajaya, Malaysia (2 February 2016) - IRONMAN Asia Pacific is delighted to announce that TIME dotCom (TIME) is back as the title sponsor for the 2016 and 2017 IRONMAN 70.3 Putrajaya.

This partnership renews TIME’s commitment towards the continued growth and success of this multi-sport in Malaysia. Having successfully collaborated in 2015, both TIME and IRONMAN look forward to even more participation this year. The IRONMAN events are supported by Malaysia Major Events, a division of Malaysia Convention and Exhibition Bureau (MyCEB), an agency under the Ministry of Tourism and Culture, Malaysia.

"We are happy and proud to have TIME back as the Title Sponsor of IRONMAN 70.3 Putrajaya for the next two years. TIME’s commitment towards the development of triathlons in Malaysia has shown great results, with one of Team TIME’s very own athletes qualifying for the 2016 IRONMAN World Championship in Kona Hawaii,” said Mr Geoff Meyer, CEO of IRONMAN Asia Pacific.

The 2016 TIME IRONMAN 70.3 Putrajaya will be held on 3 April 2016 at the magnificent administrative city of Putrajaya. The 3rd Malaysian edition of the half distance IRONMAN will start off from Anjung Floria, located at Precinct 4, with a 1.9KM swim in the beautiful lake of Putrajaya, followed by a 90KM bike ride across the districts of Putrajaya, Cyberjaya and Sepang, followed by a 21KM run around the core island of Putrajaya. The event expects to attract close to 1,500 athletes from all over the world.

Anything is Possible! Compete with the best of the best at the 2016 IRONMAN 70.3 World Championship!

Title Sponsor, TIME, encourages all Malaysians to push their limits and fight for a spot in the 2016 IRONMAN 70.3 World Championship in the town of Mooloolaba, Queensland, Australia on 4 September 2016. In line with that, the top performing Malaysian male and female athletes who qualify for the World Championships will have their entry fees, accommodation and flight expenses subsidised by TIME.