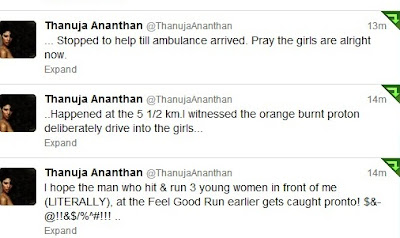 Three women runners were injured when they were hit by a car in the ntv7 Feel Good Run, a charity run organised by NTV7 in Bandar Utama this morning.

Miss World Malaysia 2009/2010, Thanuja Ananthan who was one of the runners is apparently an eye witness. She tweeted:

"I hope the man who hit & run 3 young women in front of me (LITERALLY), at the Feel Good Run earlier gets caught pronto! $&-@!!&$/%^#!!!Happened at the 5 1/2 km.I witnessed the orange burnt proton deliberately drive into the girls.. Stopped to help till ambulance arrived. Pray the girls are alright now."

According to a report from The Star, the victims, Lim Lee Ling, 43, Lee Shiau Foon, 33, and Lee Su San, 24, were hurt when a red car rammed into them after making a u-turn at 8am. Eyewitnesses said the driver of the Proton Wira did not stop and drove away.

They were sent to University Malaya Medical Center later and traffic police investigators have visited the scene.

Organisers said the driver has 24 hours to lodge a report.

Source of news: The Star 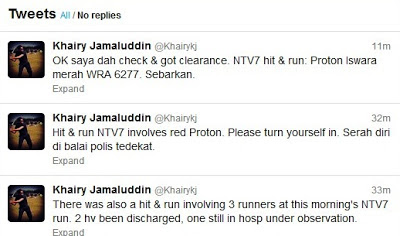 According to Minister of Youth & Sports, Khairy Jamaluddin's tweet: The car is identified as a red Proton Iswara with registration plate WRA 6277. He urged the driver to turn himself up at the nearest police station.
Posted by RunWitMe at 7/07/2013 12:17:00 pm