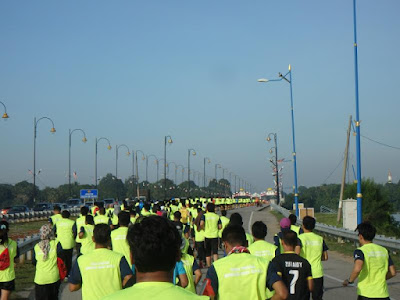 We almost didn’t make it for this inaugural UDA Pekan Bridge Run. Blame it on procrastination; thinking who would want to run in a small town like Pekan? Boy, were we wrong! The run as sold out after three days! I guess, the cheap entry fee - RM10 was simply too good to ignore. Plus you will get a nice finisher medal and a micro-dry tee from Ultron.

Since we do not want to miss this run - a run in our own hometown, we had to pull some strings to get hold of an entry. Being a blogger do have some perks like this! Heheh! Thank you En. Rayme, En. Hazrell and Puan Radziah or helping us to secure a slot. 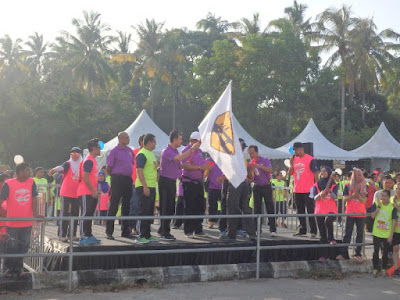 The start venue was located opposite the Ancasa Royale Hotel, a 100m from the bridge.

The run was flagged off at 8am after an exhausting Zumba session. They did FIVE Zumba songs! FIVE! Two songs are good enough. Three is max. More than that it's an overkill. Pity those pakciks and makciks who ran out of breath even before the race. A warm up session should prepare the runners by getting their muscles ready with some dynamic stretching thrown in. It is not supposed to exert the participants to the point of exhaustion with fancy dance moves. Heheh!

The Abu Bakar Bridge is the main bridge on Pahang River. It is located at Jalan Kuantan-Pekan. Construction started in 1968 and was completed two years later, with the total cost of RM2.5 million. The bridge was opened on 28 February 1970 by Almarhum Sultan Abu Bakar of Pahang. Before the bridge was built, I was told by my late grandparents that they used to take the ferry or boat to cross the Pahang River. 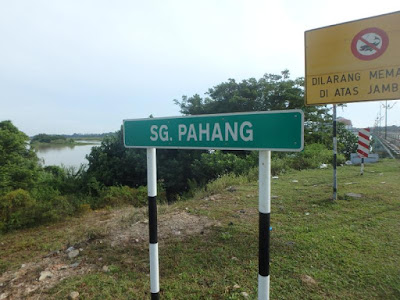 "Do small things with great love." 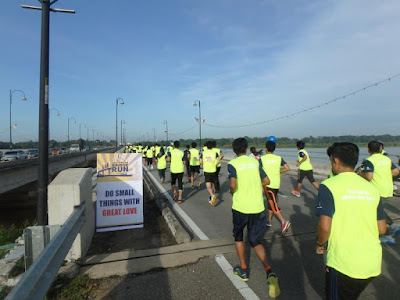 We got a heavy dose of Vitamin D that morning! The sun was up and burning by the time we were flagged off. 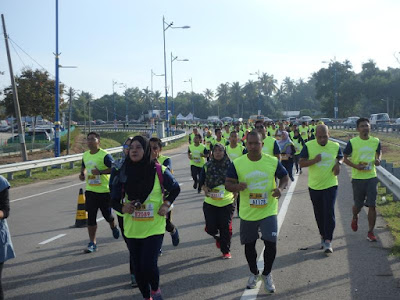 It is true when they say running and marathon events have potential not only to draw foreign visitors but also domestic tourists. Here's one from Kuala Lumpur. Heheh! Nice meeting you here, Azmi! 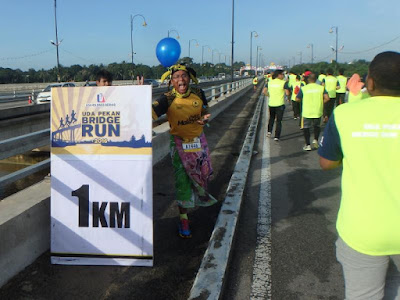 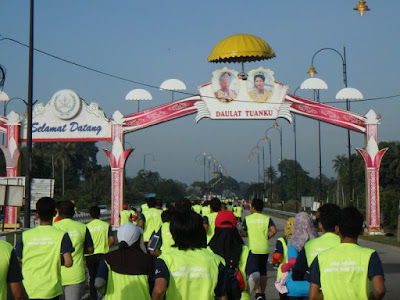 The Pekan town is located on the banks of the Pahang River 50 km south of Kuantan and about 280 km from Kuala Lumpur. Its name comes from a flower, the Bunga Pekan. Being the royal town of Pahang, it is the home of the state's royal family headed by Sultan Haji Ahmad Shah.

After the crossing the bridge, the route to us to Padang Polo, where the official residence of the Sultan of Pahang is located, before making a U-turn back. We get to see the fast runners on the opposite side of the road.

The run had attracted quite a few African runners because the of lucrative cash prizes. 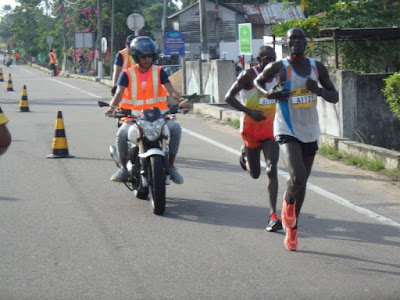 Our friend from KL, Azwan blazing through to win the first prize in the 8km Local Men's category, 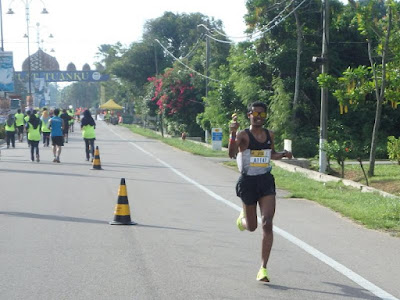 The gading or elephant tusks are quite commonly displayed as they are part of Pahang's coat of arms. The tusks represent the abundance of elephants in the state and its importance in Pahang's economy in the distance past through its trade of elephant tusks. However, it is illegal now to trade elephant tusks, so you know. 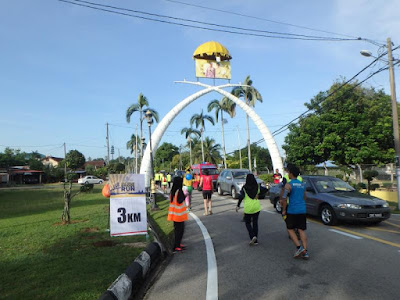 The fastest local female making her way back to the finish line. Sorry ya...We don't know your name. 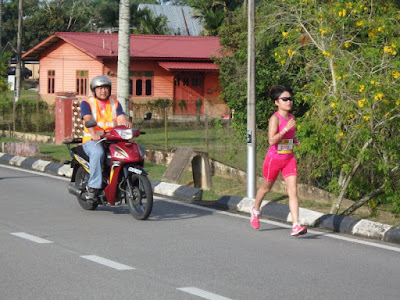 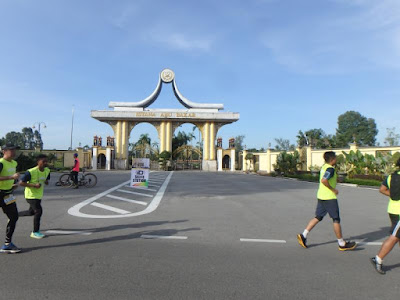 The Palace is located near the Padang Polo, my favourite place to run. 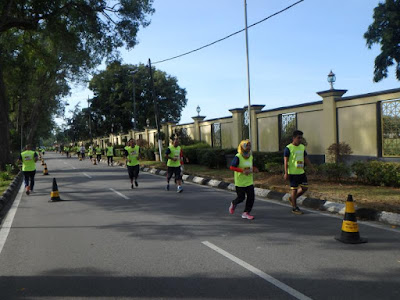 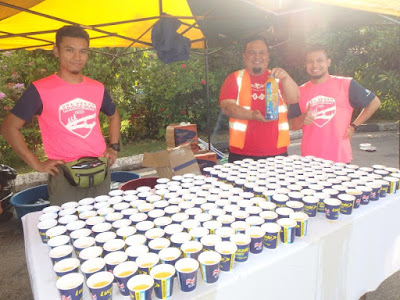 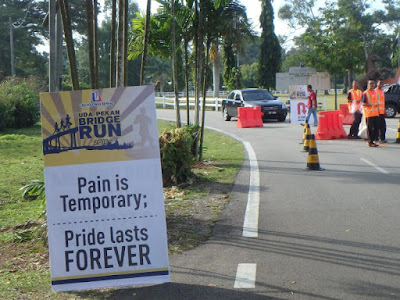 The ribbon distributors at the KM4 check-point. 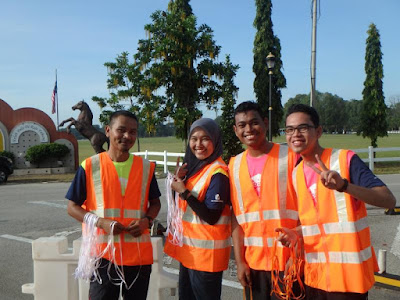 We passed by many historical landmarks along the route. This is Istana Mangga Tunggal, an old palace named after a mango tree that bore only a single fruit every season. 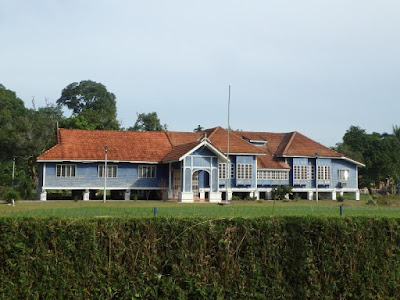 The Chief's Resthouse - A charming circa-1929 colonial wooden building exudes atmosphere and style. 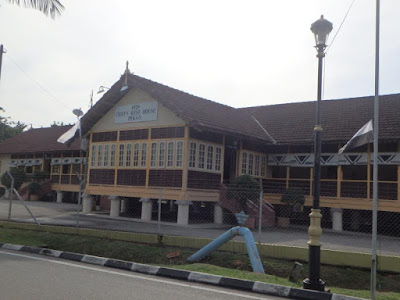 There are so many historical and beautiful landmarks that can be incorporated into the run if the route is longer. We have the Masjid Abdullah, Muzium Sultan Abu Bakar, Dataran Pekan, Pulau Beram and more. I wish they would extend the route to a 21km perhaps, to cover these wonderful places in the future.

Slowly we made our way back to the finish point at the Ancasa Royale Hotel, the biggest and latest hotel in Pekan. 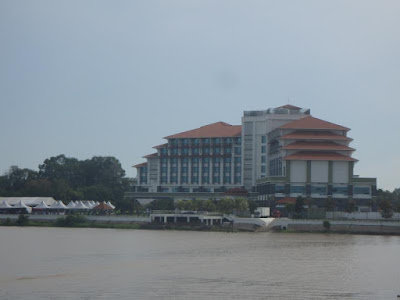 Upon reaching the finish line, we were told that they would only distribute the finisher medal at 11am after the arrival of the Prime Minister and prize presentation. Since we had a bus to Kuala Lumpur to catch at 10am, we asked our friend to collect the medal on behalf.

Overall, UDA Pekan Bridge Run got off on the right steady foot. There is so much potential to make it a bigger and better run, judging from the overwhelming response. Who knows, perhaps, there will be a Pekan International Marathon (42km) in the future?
Posted by RunWitMe at 10/17/2016 09:52:00 pm

Hope the organiser will do it again next year. Nak masuk!