Nuffnangers Run To Win Towards The Year Of The Tiger

What? The Tiger Run

Where? Jaya One, PJ

Who? Organised by Nuffnang and Tiger Beer. 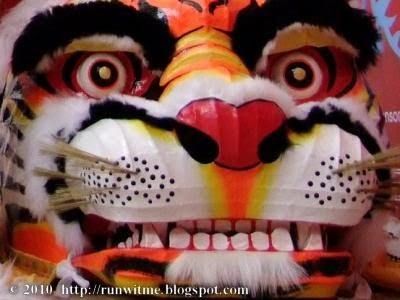 I was among the 88 bloggers selected for this run. To qualify for the race, we had to publish a blog post on our dreams in the Year of the Tiger. Read about mine HERE.

My other runners/ friends selected are Kevin, Amelia, Jue and Lil Khoo. 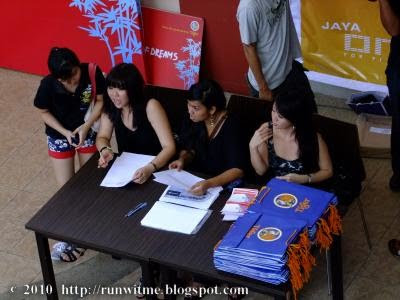 I arrived there around 3:30pm. A little early so that I could do a survey the route. Nuffnang did send a noticication about the things that we were supposed to look out for in the event.

It was not a straight forward road race. We had to perform some tasks in 5 of the outlets there! 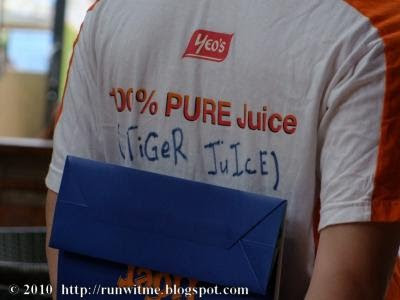 I met Lil Khoo who came even earlier than me. He already done his survey and he showed me around. Heheh! Very nice guy! :)

While waiting for the run to start, we had some fun checking out the competitions. :)

Goldilocks? Where are the bears? 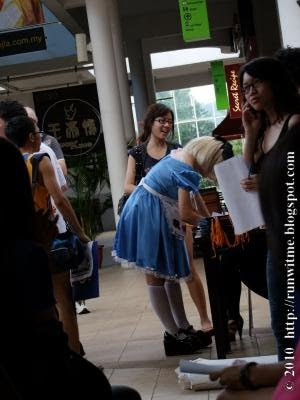 Oops! She was not dressed up as Goldilocks. She was supposed to be Alice in Wonderland. Heheh! Didn't notice her rabbit!

Check out Alice's shoes. Now, how on Earth she is going to run in them? 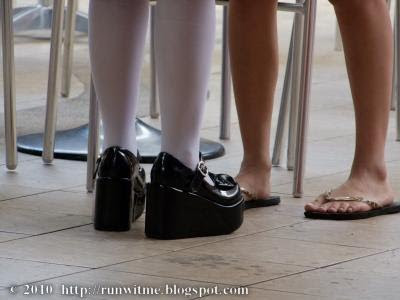 There she was just a walkin' down the street singin' Do wah diddy diddy dum diddy do.... 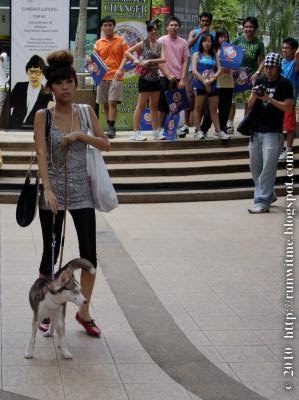 Erm...Initially we thought she was going for a dog show but she was one of the selected bloggers as well! ;)

Heheh! I am new with Nuffnang, so I don't really know many bloggers there.

That dude must be a lost communist!...:) 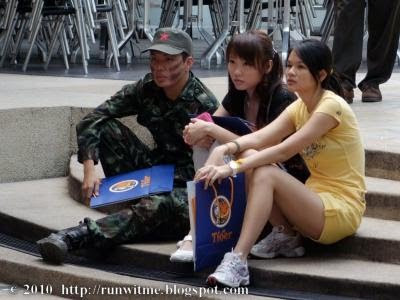 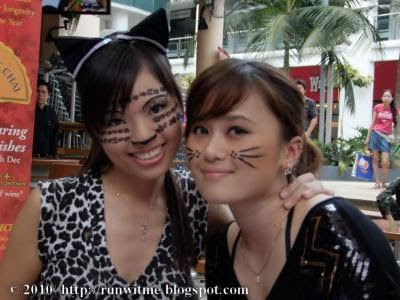 There were prizes for the best dressed male and female. I couldn't be bothered because the prizes are not that attractive! To rent a costume would cost more than the prize money. So...my running attire would do.

We were given each a empty paper bag, a map of Jaya One and a briefing before the race! 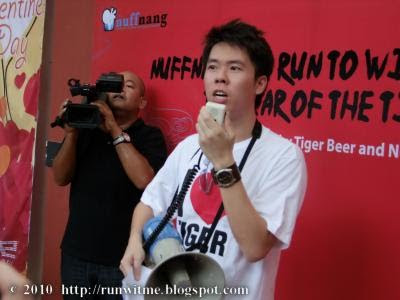 We were supposed to go around the Jaya One perimeter TWICE before proceeding to do the tasks. After each task, we have to run another half loop before going to another task. Phew! 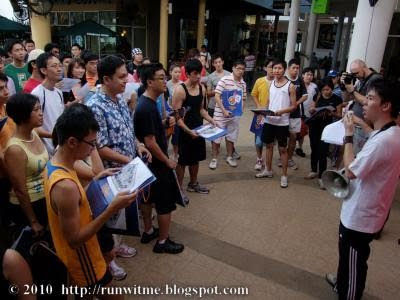 We were flagged off at THE HEADQUARTER. 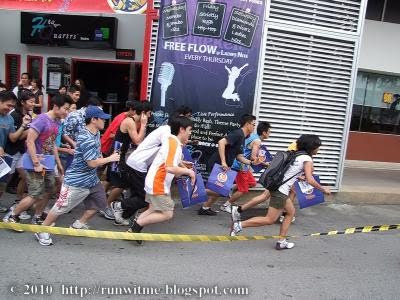 While other dashed out of sights, I took my own sweet time for the run. I was there to have fun. So, I jogged with Emeryn.

The first task was to tweet about the run in THE HEADQUARTER. Easy peasy , right? But when I reached there, there was a long queue!

TWEETIE: I TAW I TAW A PUTTY TAT. LOL! 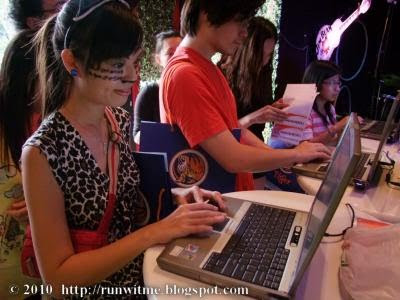 While going round the Jaya One perimeter, we had to pick up tokens from the check points and put them in the paper bag we got earlier. 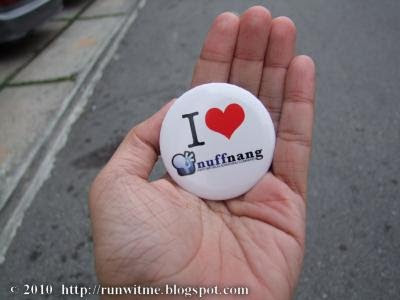 Here are the rest of the tasks.

@ Frontera - Eat a piece of chicken (Tiger food!). But I didn't know that tiger like it so SPICY! So spicy it burned my tongue! :P 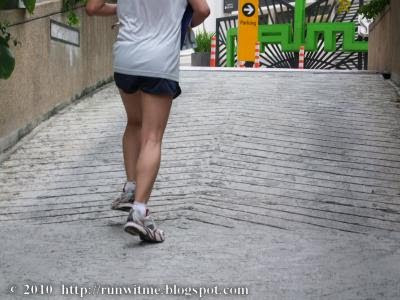 And the last task was at Bar Madrid - Pose like a tiger.

I was attempting a CROUCHING TIGER there but...erm nevermind! 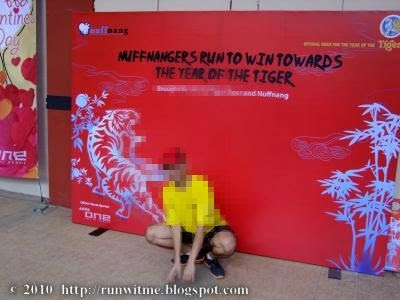 The stuff collected from the check points. Yay! We get to keep them! 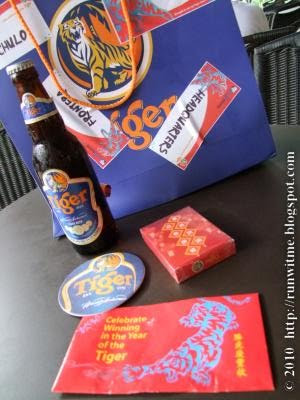 It was a fun fun run. While waiting for the prize presentation, we were treated to A TIGER DANCE.

Well, it very lion dance-que. LOL! Just the head and the tail are different. Heheh!

Dinner was served at Bar Madrid with free flow of TIGER BEER! Hic!

Prizes were presented to the winners....including a mystery category! The FIRST one to DROP OUT! It went to this fler! 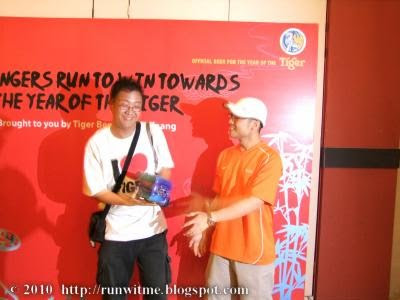 And the big winners of the nights went to these speedy gonzaleses...... 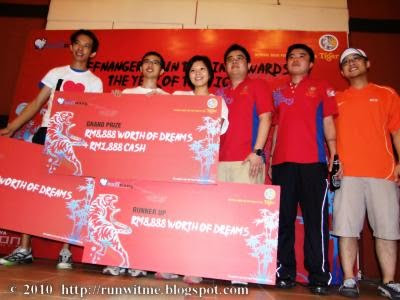 My friend, Lil Khoo won the male runner up! Congrats! The female runner up was some girl who writes about master pagan buffalo? I don't know! Heheh! Sorry, I didn't get her details. Both of them walked away with RM8,888 worth of dreams.

The post is not complete without a video. So, here it is - a summary of the task and the run proper. If you at the run, try to spot yourselves in the video and leave a comment. All participants are welcome to leave their links in the comments so that we can share each other blogs.

hi.. nice to meet you. funny, me and me frenz were just talking about tweetie bird and the exact i taw taw a putty tat this afternoon! haha and thanks for sharing the video. oh can u pls email me my pics in the original size? thanks ;)