WAKE UP FEET! It's time to train for the Nike City 10K! 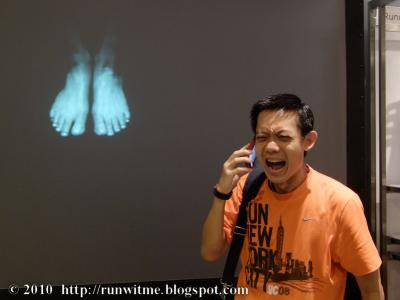 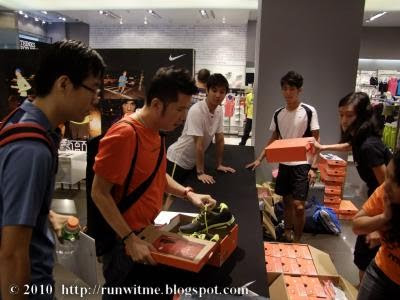 Nike Malaysia had officially launched the race route for the Nike 10K Kuala Lumpur on the morning of 21 Sept. The run is slated to take place on 10 October 2010.

The Nike City 10K will be hosted by 22 countries across the globe, with Malaysia and Singapore carrying the banner for South East Asia.

On the race day, Kuala Lumpur will witness more than 9,000 young runners racing through major streets in the city including Jalan Bukit Bintang, Jalan Ampang and Jalan Sultan Ismail in their bid to be crowned city champions.

Panoramic views of Kuala Lumpur and an engaging en route entertainment featuring top Malaysian acts including Bunkface, Estranged, Popshuvit and One Buck Short await runners who have registered for the inaugural city race.

With race participants given the option of choosing between a 5km or 10km route, Nike Malaysia is organizing a series of training runs to help these young runners commit their kilometers as they prepare for the upcoming race.

Open to public, the Nike Training Run Series will take place at select locations across the city and is designed to train runners to build stamina for long distance races. Coupled with tips from running experts, participants will also have the opportunity to trial the latest Nike running shoes.

The media was invited to kick off the Nike 10K training run by a run around Pavilion alongside the celebrities. We get to try on the Nike LunarGlide+2. 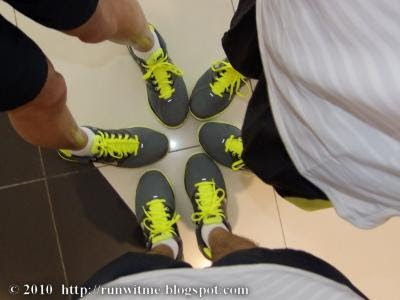 Unfortunately, we don't get the chance to keep the shoes....It is really a nice pair of shoes. :(

After changing to our running gear and laced up the Nike LunarGlide+2, we made our way down from the Nike Store to the ground floor. 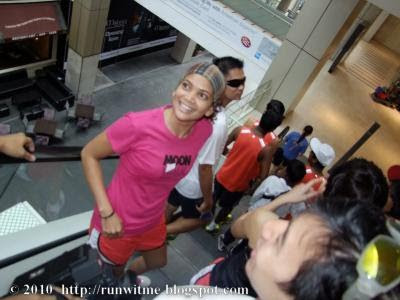 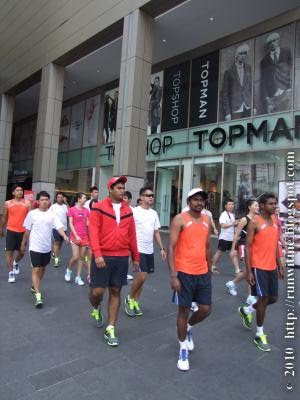 Warm up session....led by Jamie Pang. 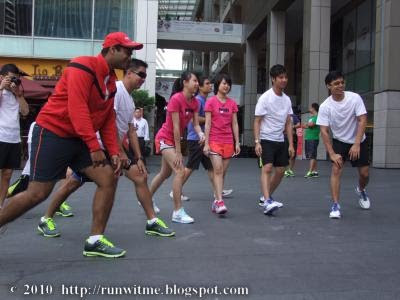 WE RUN THIS CITY! 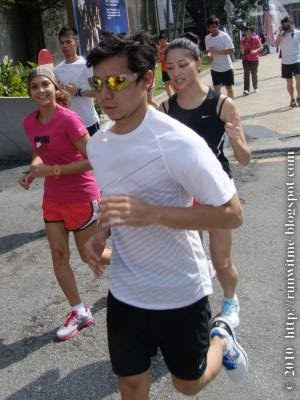 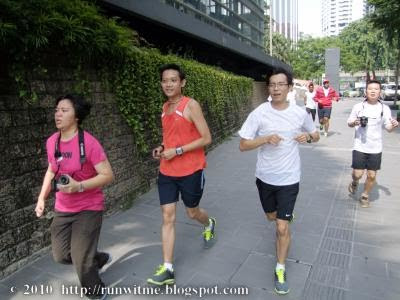 The leading pack making it back to Pavilion. 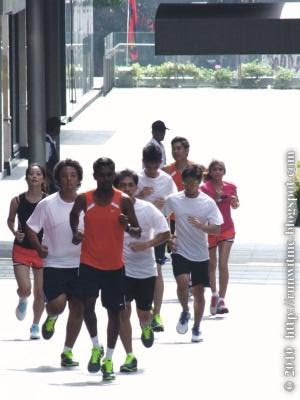 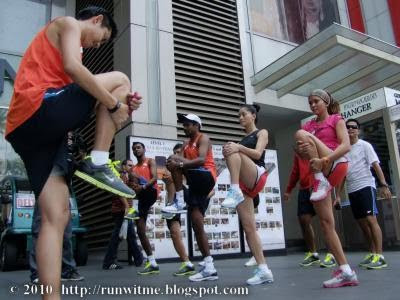 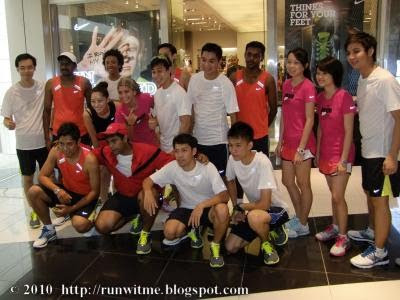 We were provided with wet cool towel to refresh ourselves. Thanks Nike! Very thoughful of you! 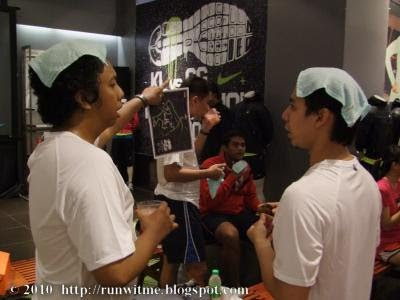 Waiting to the press con to start. 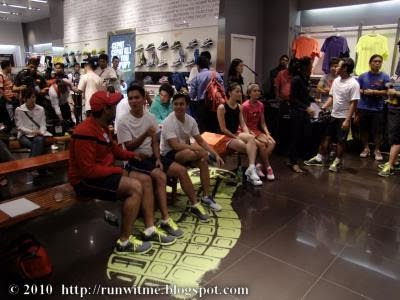 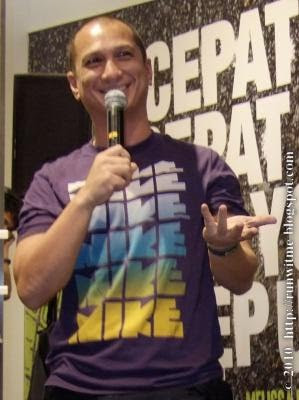 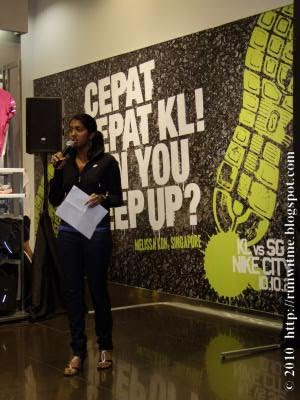 According to Mehana, “The Nike City 10K Kuala Lumpur underscores Nike Malaysia’s commitment to the running community in Malaysia and it serves to inculcate the passion of running amongst Malaysian youth. The Nike Training Run series that we launched today is part of our outreach program to educate new runners on how to run the right way and to dispel myths that running is a difficult sport to pick up.” 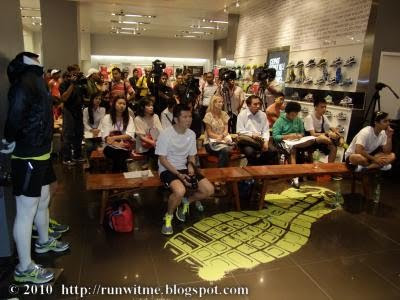 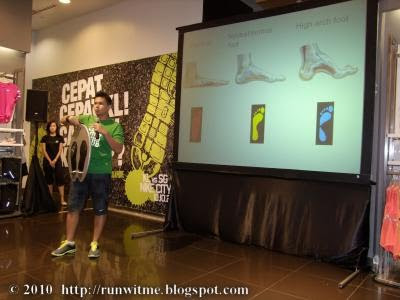 Jamie Pang (Again! LOL!) This fler is everywhere! He gave a short talk on "How To Prepare Yourself and Run a 10km Race". Check out his entry on the media launch HERE. 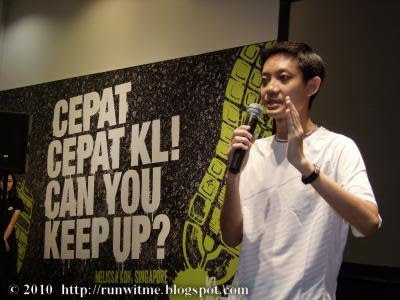 After that, the official race Tee was unveiled. Check out the funky Official Race T HERE.

FYI, Jamie Pang will be leading the Nike Training Run series, to prepare runners for the Nike City 10K.

So, it's time to wake up and smell the happy feet! 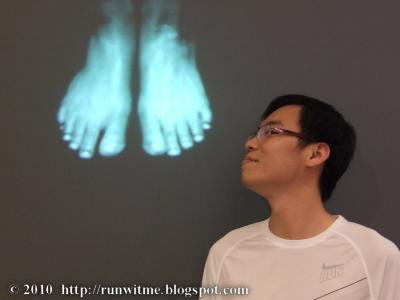 Watch the summary of the event in the video. FYI, the background music is Revolusi by Bunkface - one of the hottest bands in the country that will be performing at Nike City 10K.

Your blog is in my bloglist bro as a show of our new friendship. Hope we'll travel again together.