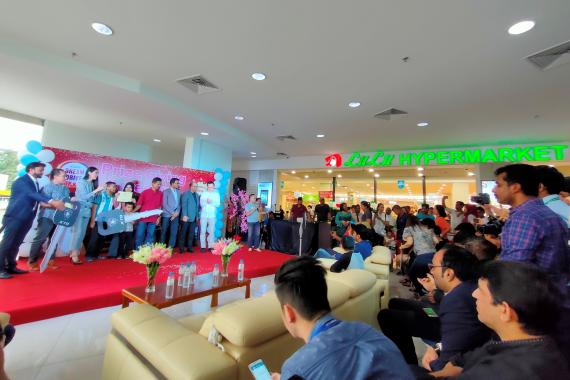 LuLu believes in giving back its loyal customers by rewarding them value for money promotions and easy to win contests. This year, the generous people at LuLu had two unit of brand new Proton X70 cars to giveaway. Not only that, there were other attractive prizes such as six Apple iPhone 7Plus, six Toshiba 49” UHD TV and 100 Lulu vouchers to be won.


To participate, each customer is required to spend a minimum of RM50 in a single receipt from Lulu Hypermarket & Department Store, Capsquare or 1 Shamelin during the promotion period. Then, he or she has to fill up a lucky draw coupon and drop it into the box provided. As simple as that!

Two grand draws were conducted on 5 July and 6 September 2019. All top prize winners were presented with their prizes by Mr. Asif, The Regional Director of LuLu Hypermarket, accompanied by special guest, supermodel Amber Chia.

Shoppers and guests were entertained with a series of cultural dances and a magic show. Congrats to all the winners!

Lulu Group Retail Sdn Bhd is a network of Hypermarket, which was established in the year 2000 by Mr. MA Yousuf Ali. He is the founder and Managing Director of the Group of companies which is based in Abu Dhabi. Lulu Group Retail International has over 55,000 employees from different countries. Currently, Lulu operates a total of 177 stores across the GCC and South-East Asia.

Lulu expansion plan in Malaysia is boosted by the opening of the latest store in 1 Shamelin last July. A few more outlets in the pipeline are Lulu Setia City Mall (first quarter 2020), Bangi Gateway Bachang (Malacca) and Johor Bahru (both by mid-2020). The plan is to have 10 stores throughout Malaysia in the next 5 years. This will create more than 5,000 job opportunity to the locals.

To find out the latest promotion at the Lulu Hypermarket, please visit
Official web page: http://malaysia.luluhypermarket.com/MY/all
Facebook: https://www.facebook.com/LuLuHypermarketKL/
Instagram: https://www.instagram.com/luluhypermarketkl/
Posted by RunWitMe at 10/03/2019 07:44:00 am