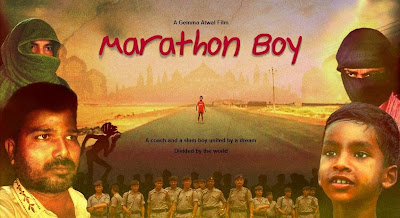 Synopsis: At three, Budhia Singh had already run six 13-mile half-marathons. Born into the slums of Bhubaneswar in the eastern Indian state of Orissa, Budhia's mother sold him to a peddler for 800 rupees. Not long after Biranchi Das, a judo teacher who also runs an orphanage, bought him back, and soon discovers Budhia's talent for running.. But when Biranchi has the four year old Budhia run 42 miles, the debate begins: is he providing Budhia with a rare opportunity, or is he exploiting a boy too young to know what he really wants. When the government gets involved the case becomes a political football, and rumours of vast sums of money attract gangsters eager to drive a wedge between Biranchi and Budhia. What starts out as a real Slumdog Millionaire turns into a the stuff of film noir, a tale of dreams, greed, and envy, with a child at its centre. Written by Gemma Atwal. The director of Marathon Boy.

Wow! Sounds like a great movie. It is not a fiction but a documentary with footage gathered over several years (that begins with Budhia aged three, and ends when he’s aged eight). A true story about an amazing boy! I hope this movie make it to our shores, at GSC International Screens the very least.