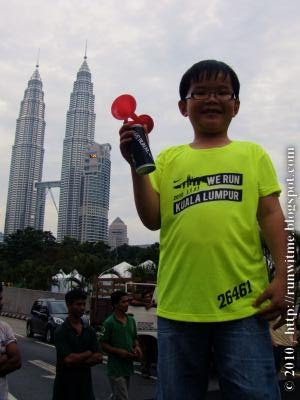 It was surreal even before I reached KLCC, the starting point. I noticed the bright yellow-green t-shirts right away as I boarded the LRT from Asia Jaya station. As the move closer to KLCC, more and more runners in the bright yellow T boarded the lrt. We might not know each other but...we had one purpose. We going to KLCC and We gonna run KL. :)

I saw some familiar faces at the start point- Choi, Carrie, John Wong etc. Too many to mention. Tey was busy taking photograph as usual.

This is DeqWan, the host for Remaja TV3 checking out the bananas....If they have allocate one banana each for each runner, there would be 8,000 bananas in KLCC that morning! A quantity that will drive any monkey banana..LOL! 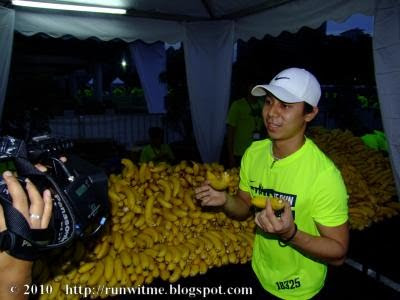 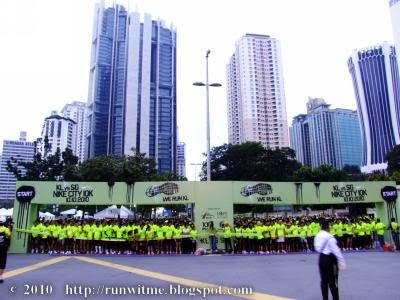 At the start point, more than 8,000 runners awaited for the blast off. All wearing the same striking bright yellow-green t-shirts.

I was told that local celebrities and bloggers including Adi Fashla of ERA FM, Ean Nasrun of HitzFM, Sarah Lian and Niki Cheong were amongst the runners. I didnt manage to spot them in the sea of yellow-green! LOL! 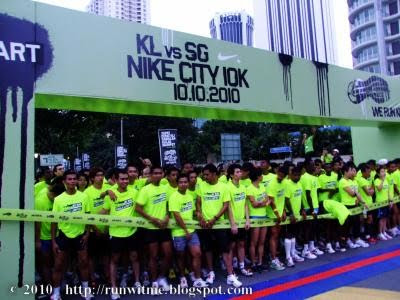 The KLCC Twin Tower makes a spectacular backdrop for the start of this unique race on a unique date 10.10.10! in Malaysia. Through the course, runners would conquered the city's wellknown roads such as Jalan Bukit Bintang, Jalan P. Ramlee and the Ampang KL Elevated Highway (AKLEH) to more great views of the KL city skyline. 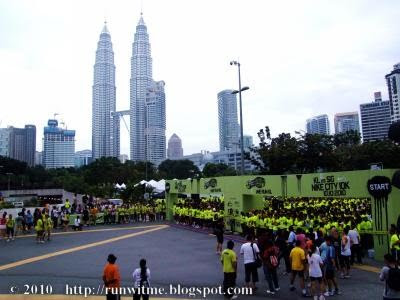 Hitz.FM morning crew DJ was on hand to spur runners at the start line. 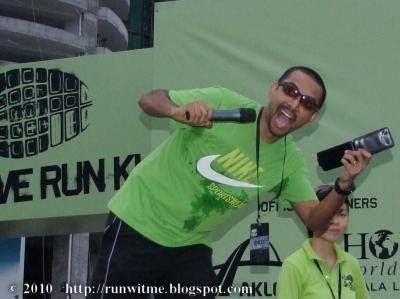 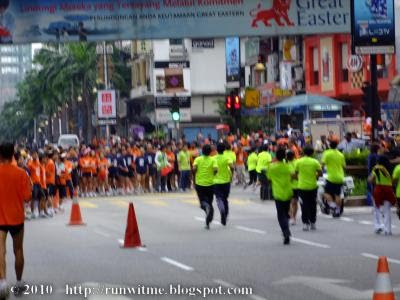 Nike Malaysia went up a step futher to ensure a premium race experience for runners with performances positioned at key zones along both race routes to motivate and energize runners. 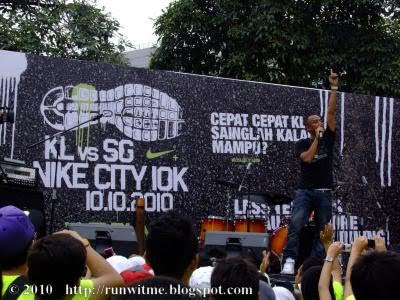 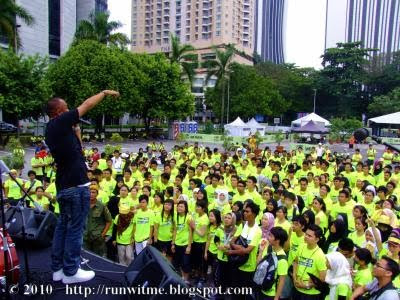 The Nike City 10K is hosted by 22 countries across the globe, with Malaysia and Singapore carrying the banner for South East Asia. In addition to the physical race on 10.10.10, both cities will be pitting their runners in an inter-city race that will see Malaysian runners lace up against their Singaporean counter parts to clock kilometers from their city starting 1 september 2010 till 31st October 2010 using Nike+ Sportband.

The country with the highest number of kilometers wins US30,000 for their chosen charity - HOPE Malaysia and Singapore Children's Society.

For more information on Nike City 10K KL, please log on to www.nikerunning.com.my 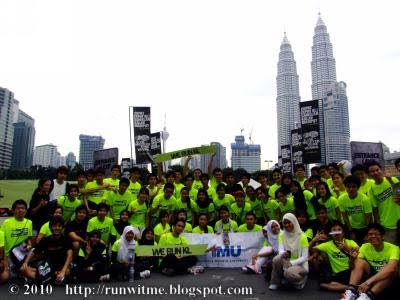 After the Nike City 10K flag off, I made my own dash to Lot 10 where another run was scheduled - The hooHa 10!10!10! Fun Run. I got the task to flag off thousands of runners. But that's another blogpost all together...Please comeback for it. :)

At the mean time check out awesome video.

Note: Soundtrack for the above video is Minute To The End from Bunkface, one of the bands that performed at Nike City 10K KL. Like them in FB at http://www.facebook.com/#!/bunkfaceband