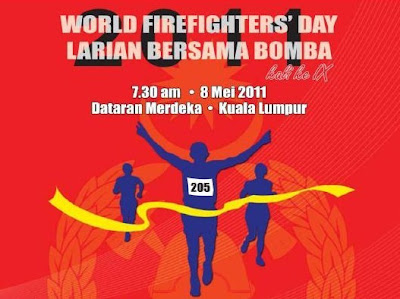 Who? Organised by Fire and Rescue Department

Why? In conjunction of World Firefighters' Day which is on May 4 every year.

How? More info and download the entry form HERE.

World Firefighter's Day is being celebrated throughout the world on May 4. This day was started in the honour and respect of the firefighters in 1999 when five Australian fire fighters died while performing their duties.

Various programs are being organised so that the work of the firefighters can be recognized throughout the world.

This year marks the 9th year Larian Bersama Bomba is being organised in Malaysia. It is quite a popular run. We have seen some firefighting demo, exhibition and a mini carnival held after the run in the past years. So, we can expect the same fare this year. Kids will have a fun time checking out the fire trucks upclose.