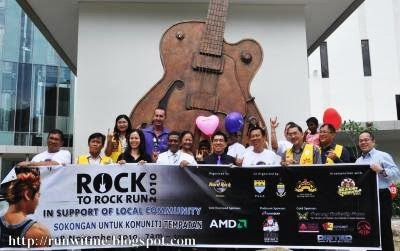 1,000 runners will be participating in the first ever “Rock to Rock Run 2010” by Hard Rock Hotel Penang which is scheduled to be held on 28 November 2010 along Batu Ferringhi.

“Rock to Rock Run 2010” is co-organized with the Penang Amateur Athletic Association (PAAA) and Lions Club of Penang Gold Coast in conjunction of the Penang Beach Carnival 2010, a project initiated by the Penang State Government. To date, this 5km charity fun-run has raised over RM30,000 in cash through participation fees and sponsorship from various corporate companies and organization. 100% of the funds raised will be channelled towards Rumah Kebajikan Seri Cahaya.

“The response that we have received from runners as well as the contributors is indeed overwhelming. The positive start has definitely set the right platform to a great event this coming 28 November. Apart from fulfilling a philanthropic commitment, the organizing committee looks forward to a fun day that will bring cheer to the children and residents at Rumah Kebajikan Seri Cahaya,” said John Primmer, General Manager at a recent press conference held at Hard Rock Cafe Penang

The last one month also saw additional sponsors contributing towards this run. “At AMD, we believe in community involvement as a responsible global corporate citizen. For more than 38 years, AMD Penang has proactively engaged with local community charities. We support Hard Rock Hotel’s public-spirited philanthropic initiative in organizing the Rock to Rock Run 2010 in aid of the Rumah Seri Cahaya charity home. Together, let’s bring cheer and hope to the 90 inmates,” said Mr. Leong Chee Cheow from AMD.

In addition to AMD, the sole Platinum Sponsor which has been part of Rock to Rock Run since its launch, Rock to Rock Run has received great support from other new sponsors including Platinum Sponsors such as Parex Group and Lion’s Club Gold Coast as well as Gold Sponsors such as Penang Butterfly Farm, Penang Spice Garden, AIA, Disted College and EC Concept Enterprise.

On the event day, participants and guests will be entertained with live music by Nightshift from Philippines as well as the champion of Battle of the Bands organized by the Penang State Government. Staff from Hard Rock Hotel Penang will also be showcasing their musical talent on this day.

Other activities include a donation drive whereby limited edition “Rock to Rock Run 2010” pins will be given away with a minimum donation of RM30 per person. Only 300 units of these pins are available on this day.

EC Concept Enterprise will also be selling “rock art” at RM18each. All proceeds will benefit “Rock to Rock Run 2010” for Rumah Kebajikan Seri Cahaya. Guests can also enjoy Hard Rock Cafe burgers which will be sold at the food stalls available on site.