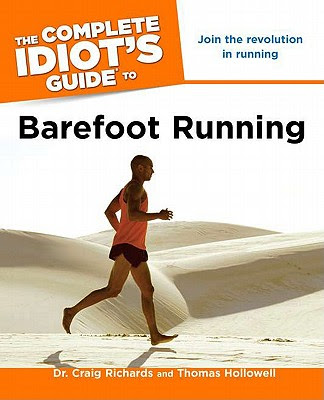 Hi Guys! If you have a twitter account and would like to find out more about barefoot running, you are invited to join the tweet chat with Dr. Craig Richards and Thomas Hollowell, authors of The Complete Idiot’s Guide® to Barefoot Running.


They will discuss the benefits of running naturally. The barefoot running and minimalist-footwear revolution is here and it is turning the world of running on its feet! The TweetChat will take place on Thursday, March 31 at 2:00 pm CT. Log on to Twitter and search #AskCIG to participate. Please include #AskCIG in all questions.

During the Tweetchat Richards and Hollowell will cover:

The Complete Idiot’s Guide® to Barefoot Running also includes coverage about the science and mechanics of barefoot running, the role of “bare” nutrition, and training plans for short-distance to ultra-endurance athletes.

About the authors:
Dr. Craig Richards (Raworth, Australia) is internationally recognized as a leading expert of the western world’s barefoot running revolution. A medical doctor and keen runner, Richards began running barefoot in 1998 after recurrent injuries led him to hypothesize that his supposed top-notch running shoes might be responsible. This led to a period of successful experimentation where Richards rediscovered the joys and the injury prevention benefits of barefoot running for himself. In 2002, he co-designed and patented the first “barefoot” running shoe of the modern era, appropriately called the Barefoot on Grass. In 2008, he released a landmark paper that laid out the complete lack of scientific evidence to support the ongoing use of heavily cushioned running shoes with anti-pronation features tailored to foot type. His work has been widely reported in newspapers such as the New York Times, Washington Post, and London’s Daily Mail, in magazines such as Running Times and Popular Mechanics, as well as in the recent best-selling book, Born to Run.
Thomas Hollowell (Perrysville, Ind.) is a full-time author, USAT tri-athlete, prominent barefoot runner, and a running coach for a university triathlon club abroad. He is the founder of Barefoot-Running.us, an acclaimed blog dedicated to natural and minimalist running. His features and columns have appeared in notable publications and media outlets worldwide. Visit http://www.barefoot-running.us

Updated: Heres a summary of the TweetChat that day. ENJOY! http://idiotsguidesblog.com/2011/03/time-to-hit-the-ground-running-–-barefoot-running-tweetchat-summary/