My Run - The Terry Hitchcock Story 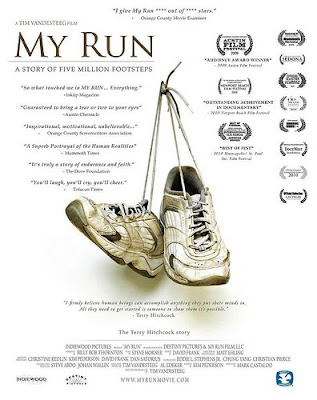 Sometimes we do get some gems in the tonnes of spam emails that we received everyday. We got this one today and we feel that we would share it with you, even though it would be impossible for us to attend the premiere in the USA. LOL!

We are putting this movie on a must watch list when it is released (we hope soon) on DVD.

Centennial, Colo. – Together with Indiewood Pictures and Destiny Pictures, NCM Fathom presents the award-winning and critically-acclaimed documentary MY RUN in more than 500 movie theaters nationwide for an exclusive one-night event on Thursday, March 31 at 7:00 p.m. Narrated by Academy Award® winner Billy Bob Thornton, MY RUN is the inspirational story of Terry Hitchcock, the 57-year-old widower and father who ran from his home in St. Paul, Minn. to the opening ceremony of the summer Olympics in Atlanta, Ga.

This powerful and uplifting event takes audiences along with Hitchcock as he runs 75 consecutive marathons in 75 consecutive days. Together with his son and support team member, Hitchcock will discuss their journey and share a deeper look into the struggles of the 2,000-mile endurance test in a pre-recorded Q&A following the documentary. Audiences will learn about the emotional and physical toll on Hitchcock after the run – which has never been discussed until this exclusive event.

Tickets to MY RUN Premiere Event are available at participating theater box offices and online at www.FathomEvents.com. For a complete list of theater locations and prices, visit the web site (theaters and participants may be subject to change). A portion of proceeds will benefit the LIVESTRONG Foundation.

Presented in association with ACTIVE.com, LIVESTRONG and Life Time Fitness (NYSE: LTM), MY RUN is a tale of two marathons: one began when Hitchcock’s wife died of breast cancer; the other when he set out on a journey to bring awareness and a voice to the struggles faced by single parent families and their children. Hitchcock ran in spite of freezing rain, unbearable heat, chest pains and bone fractures. He didn’t stop until he crossed the finish line in Atlanta.

“I firmly believe human beings can accomplish anything they put their minds to,” said Hitchcock. “All they need to get started is someone to show them it’s possible.”

MY RUN, directed and produced by Tim VandeSteeg and produced by Mark Castaldo, will be shown in 514 select movie theaters through NCM’s exclusive Digital Broadcast Network.