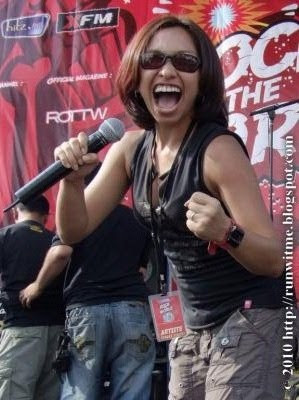 Rina Omar "melatah" (sorry can't find an equivalent meaning in English for this) when she lost her balance doing the running pose. We actually approached her for the pose after the concert went for a break for Asar prayer. When she was actually still on stage.

Realizing that the mic was not turned off yet, she apologized profusely to the people that were still around in front of the Indie Stage that she didn't mean to call them babi (pigs). LOL!

Thanks for the pose, Rina! Love the enthusiasm. :) 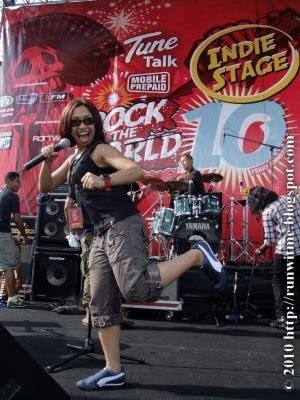 Rina was the emcee for the Indie Stage at the Rock The World 10 Music Festival.

We were really spoilt for choice because there were 34 bands performing in 2 different stages - The Main Stage & The Indie Stage at the Rock The World Music Festival.

Concert started at noon but we only reached Bukit Jalil Carpark around 2 something. Woke up late abit because was bushed after Konsert Gemuruh DT yesterday night (Hot photos of Search & Wings coming soon!) 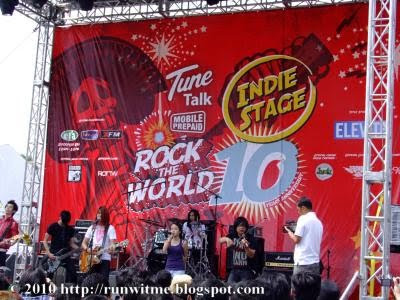 The band An Honest Mistake was playing when we arrived. 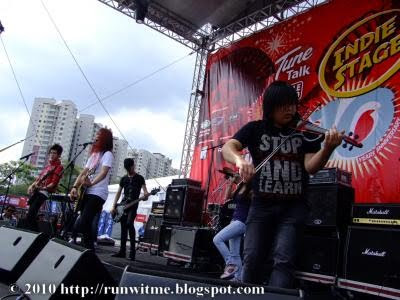 They were rocking alright until the lead singer decided to be Spiderman and climbed up the stage scaffolding... 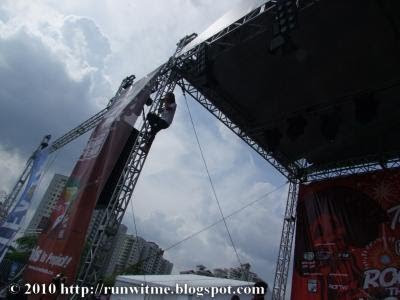 It is not an honest mistake but rather a stupid one if you ask me. The organiser decided to pull all plugs until he came down. The music stopped. Boo hoo! 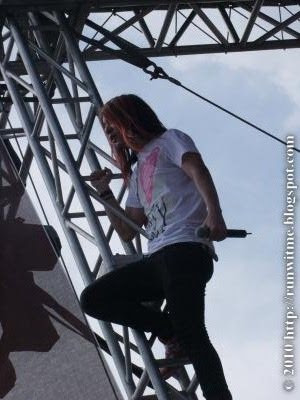 Hey boy, please love life. Don't attempt any stunt like that again without safety precaution. We want you to keep rocking like this uncle below.. :) 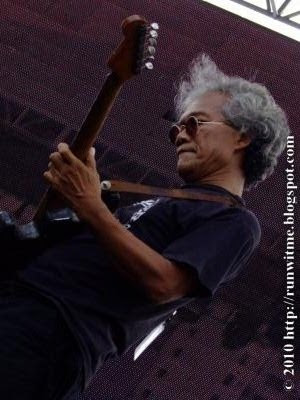 The Main Stage of Rock The World 10 boasted 19 bands comprising the best acts that had been featured throughout the whole 10 years of Rock The World. They were among others, Pop Shuvit..... 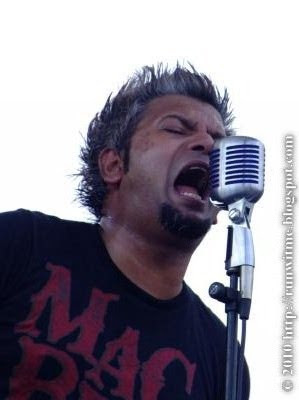 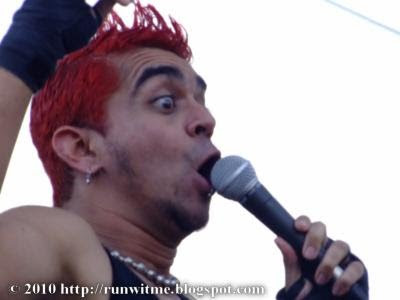 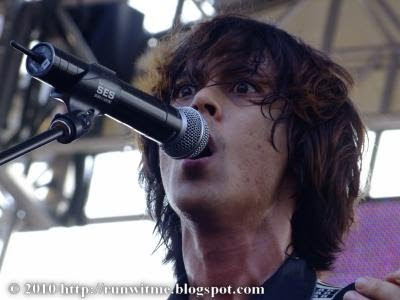 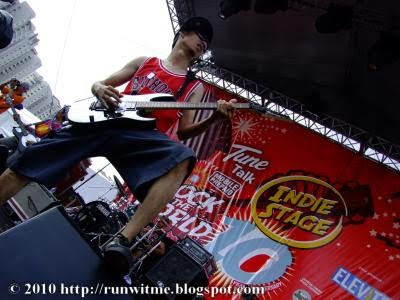 Crowd surfing is a popular "sport" at the Rock The World 10. 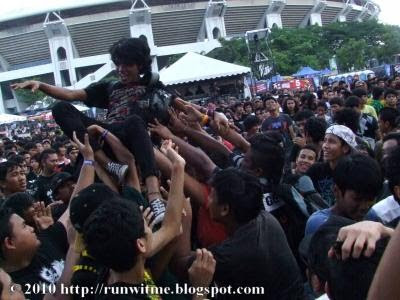 Everybody wanted to do it... 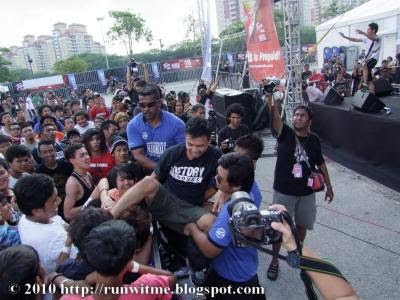 ...including the fler from Pop Shuvit. He didn't get very far. We think it's time for him to loose some of them weight. LOL! 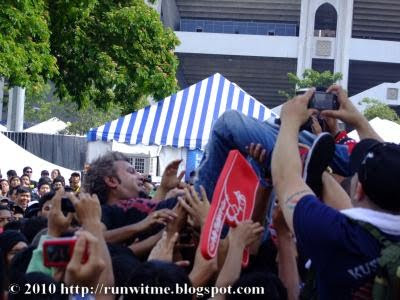 Hear her sing....(Pssst..The expression on the man's face is priceless. LOL!) 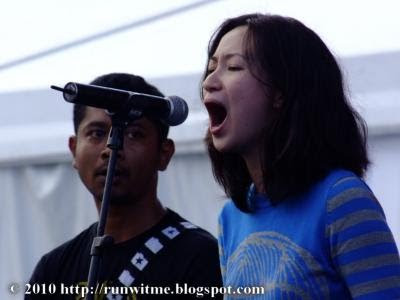 Tune Talk Mobile Prepaid subscribers enjoyed a lot of free stuff at the event - including access to carnival games, win top ups, passes to meet and greet the bands at Tune Talk's booths, free popcorn, chance to win a Rock The World 10 autographed guitar and complimentary downloads of songs performed at the event! Cool eh? 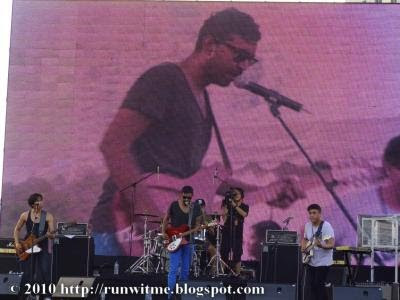 The price of the festival tickets are dirt-cheap! RM30 for almost 11 hours of live music on two stages! 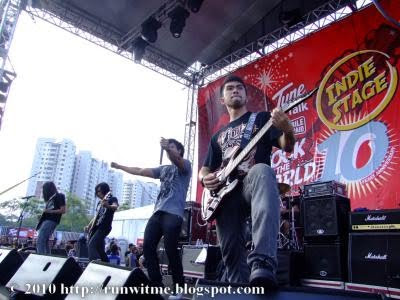 Phew....Our ears almost bled from the sonic assault but we really had fun at the festival. Rawk!!!! 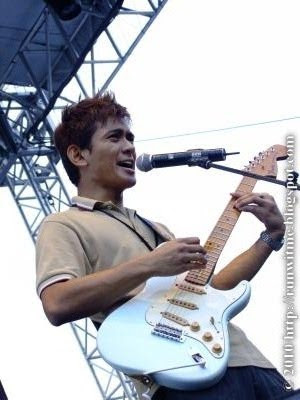 We really wanted to stay late at the concert but we decided to make a move out of that area before the football crowd for Malaysia vs Indonesia final for Suzuki Cup swarm the street. LOL! Congrats to Malaysia for trashing Indon 3-0! Woo hoo!

We can't wait for Rock The World 11 in 2011! We certainly do not need foreign rock bands for a rocking time! Support of local boys and girls in music! 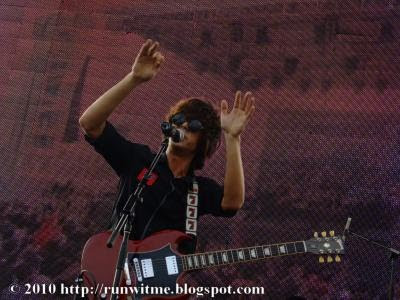